1,000 Nigerian Shops Shut Down By Ghanians Over Border Closure


Almost 1,000 shops belonging to Nigerian traders are being illegally shut down as a retaliation to the border closure which began in August. 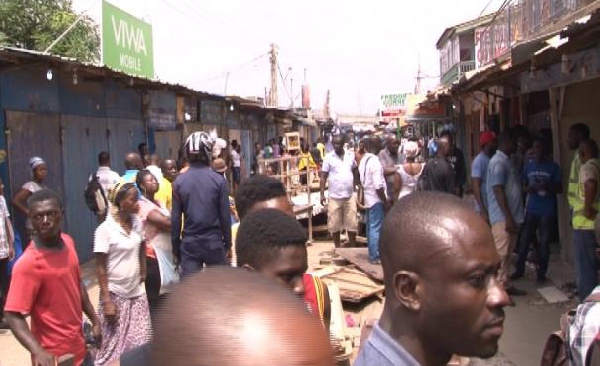 Nigerian shops shut down by Ghanians over border closure

The rising attacks on shops owned by Nigerians in Ghana have escalated since the Federal Government of Nigeria shut its borders, the Nigerian High Commissioner to Ghana, Ambassador Olufemi Abikoye, has said.

Abikoye said about 1,000 shops owned by Nigerians had been shut as a  retaliation for the border closure which began in August.

The shutting of the shops is being enforced by the Ghana Union of Traders’ Association.

Abikoye said in a statement that there was a need for both Ghana and Nigeria to settle things amicably so as not to destroy the good relationship between both countries.

The statement further read, “It is recalled that there has been ongoing tension between Ghanaian and Nigerian traders of recent, with almost 1,000 shops belonging to Nigerian traders being illegally shut down by the GUTA members.

“The excuse for their action was linked to Nigeria’s temporary closure of its land border and the short-listing of about 45 products from the ECOWAS trade liberalisation scheme, an action which they claimed crippled their trading activities with Nigeria.

“Given the above scenario, it is pertinent to note that such attacks by GUTA which could threaten the national security of both countries and mar bilateral relations may likely continue if drastic steps are not taken by both governments to address the issue amicably.”

He noted that GUTA, on Monday, carried out another round of attacks on Nigerian retailers. The attackers, wielding various weapons, carried out the attacks at Circle Tip Toe Lane, near the Kwame Nkrumah Interchange in Accra, Ghana.

The attack occurred following an attempt by the Nigerians to reopen their shops which were locked on December 1, 2019 by members of GUTA allegedly using operatives of the Ghana Police Force.

This led to a clash between the two sides.

The high commissioner said in a bid to ensure the safety of lives and property of the Nigerian traders, the commission swiftly contacted the Ghana Police Force to come to their rescue by mobilising sufficient personnel to disarm the invading attackers as well as restoring peace and normalcy in the area.

Abikoye also sought the intervention of various Ghanaian establishments to ensure that the illegally locked shops were immediately opened.

He noted, however, that the shops were under lock and key as the situation was a bit tense.

The commissioner said though no live was lost during the incidence, seven arrests were made, four of who are Nigerians: Uche Onwurah, Chizoba Onwurah, Abuchi Kenneth, Onyekachi Iheoma and Darlington Logo, and three Ghanaians.

The statement read further that the District Police Commander, Nima Police Station, ACP Abraham Acquaye, had advised that the shops should remain locked for possible dialogue to take place.

In the aftermath of the attacks, an Executive member of GUTA, Mr Eric Gumfi, in a press statement on Monday, further threatened that GUTA would continue with the closure of all shops belonging to foreigners in ensuring the GIPC Act was enforced.

Meanwhile, there is ongoing dialogue between the High Commissioner and the Ghanaian Government functionaries on the best way to permanently put the situation under control.

But the House of Representatives has condemned the attacks on Nigerian traders in Ghana, saying it is a transfer of aggression by Ghanaians over the closure of Nigeria’s land borders.

The House, at the plenary on Wednesday, urged the Nigerians in Diaspora Commission and the Federal Ministry of Foreign Affairs to investigate the attacks.

The House also mandated the Committees on Diaspora Affairs, Foreign Affairs, and Treaties, Protocols and Agreements to “consider and investigate the recent developments among traders in Ghana and ensure that another xenophobic attack on Nigerians is prevented.”

The move followed the unanimous adoption of a motion sponsored by the Chairman, House Committee on Diaspora Affairs, Tolulope Akande-Sadipe, titled ‘Recent attacks on Nigerian Traders in Circle Market, Ghana.’

Moving the motion, Akande-Sadipe recalled that on Sunday, over 600 shops belonging to foreign traders, particularly Nigerians, at the Kwame Nkrumah Circle, Ghana, were locked up by members of GUTA.

The lawmaker said, “The House is concerned that the recent attack on Nigerian traders would become another xenophobic attack with loss of lives, as GUTA have decided to take laws into their own hands because, according to them, the government had failed to enforce the GIPC Law 865 Articles 27 and 28, which bars foreigners from doing retail business in Ghana.”

Several lawmakers who seconded the motion warned against another xenophobic attack on Nigerians in Ghana as being experienced in South Africa.