Some sea pirates have seized as many as nineteen foreigners on board a vessel in Rivers state. 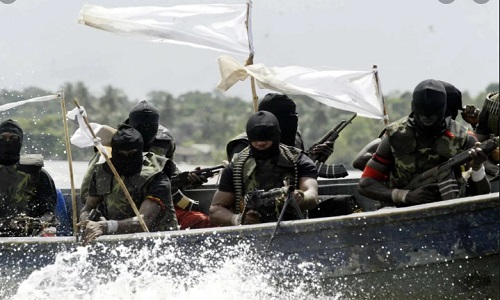 According to a report by The Nation, sea pirates have seized nineteen expatriates on board of a vessel loaded with Bonny Light crude oil, seventy nautical miles from Bonny Island in Rivers State, shortly after loading at the offshore facility of Shell Petroleum Development Company of Nigeria Limited (SPDC).

The victims comprising 18 Indians and one Turkish, with seven of the crew members left on board of the Hongkong flag vessel: Nove Chovstellation, which was still moving seaward and 150 nautical miles away, as at time of this report, in spite of the efforts of naval personnel.

A top naval officer at the Forward Operating Base (FOB) of the Nigerian Navy on Bonny Island, the headquarters of Bonny Local Government Area of Rivers, who spoke in confidence this morning through the telephone, stated that the Nigerian agent of the vessel: Integrated Shipping Services, did not request naval protection after loading, as usual, to take the vessel to a particular point, before entering international waters, with the agent quoting the vessel owner as insisting that the protection was not needed.

The naval officer also disclosed that the vessel loaded on December 3, but it was attacked on December 4, stressing that the vessel must be returned to the loading point and the needful to be done, with investigation by naval personnel continuing, as the vessel was being monitored from the FOB, through sophisticated equipment, while the agent was still being spoken with.