Inside The Gombe School Where Students Share Hostels With Bats (Photos)


This is a look into the Gombe school where students actually share hostels with bats.

Ismail Musa (not real name) lay helpless on a broken iron bed inside a ramshackle classroom block, which was converted to a students’ hostel at Government Comprehensive Secondary School, Dadin-Kowa, Gombe State.

Musa shares this accommodation with about 600 other students and an unknown number of bats. This has been the case since the destruction of the students’ hostel blocks in 2010.

On approach to the classroom block-cum-hostel, a visitor is greeted by the strong stench of bat faeces that becomes unbearable in the building after a few minutes stay.

Though a co-educational school, only the boys stay in the makeshift hostels. The school, formerly Government Secondary School (GSS), Dadin-Kowa, was established as a male boarding secondary school alongside GSS, Nafada, GSS, Dukku and GSS, Tula in 1977, during the administration of the first Military Administrator of Bauchi State, Colonel Mohammed Bello Kaliel.

The schools were established to provide qualitative secondary education in the areas of science, commerce and arts to teeming youths from Gombe LGA and surrounding LGAs under the then Bauchi State.

During GSS Dadin-Kowa’s glory days, the agriculture, biology, chemistry and physics laboratories were well equipped, with a well-stocked library and a decent hostel and well laid out classrooms, administration blocks and staff quarters.

The first set graduated in 1982 and have since joined different fields of endeavours in the country and beyond, garnering a list of alumni that includes the likes of Professor Abubakar Mu’azu of the University of Maiduguri, Comptroller of Customs, Yusuf Kurba, a chieftain of All Progressives Congress (APC), Abubakar Muazu Hassan and a former member of the House of Representatives, Umar Shuaibu Galadima, senior police officers, academics among others.

At its peak, during the first decade of its establishment, the school became a reference point where parents struggled to enroll their children because of the qualitative education and training provided in the school.

Years of neglect, beginning in the 1990s, have seen the school fall into disrepair and have left the students now sharing accommodation with bats. The laboratories are dilapidated and most of the books in the library were either stolen or have become outdated.

Also student performances in the West African Senior Secondary School (WASSCE) Examination worsened, with most failing to secure at least three credits to proceed to a higher institution.

In an attempt to salvage the school, the state government in 1999 relocated it to Hina town to pave way for the takeoff of the then newly established Federal Government Girls College (FGGC). However, the FGGC was later established in Bajoga town in Funakaye LGA, leaving the renovated structures at Dadin-Kowa to decay. 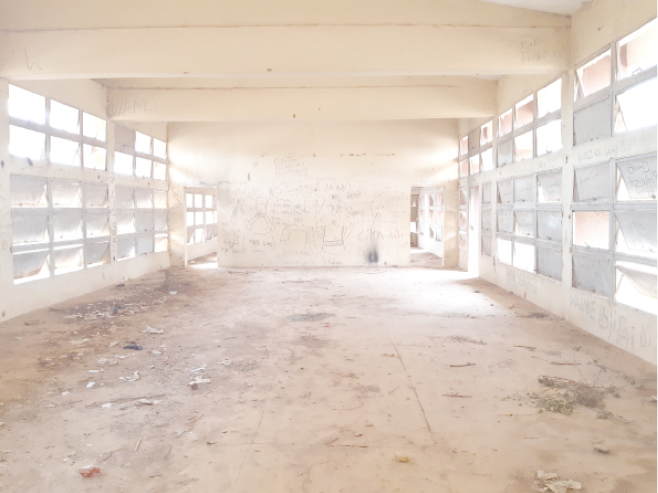 The library with shelves but no books

In 2004, the then administration of Governor Muhammad Danjuma Goje relocated the Government Arts Secondary School (GASS), Gombe to Dadin-Kowa from its permanent site in Gombe, presently occupied by the Gombe State University.

The school operated as GASS, Dadin-Kowa from 2004 until 2010 when during a violent riot, the students burnt the hostel and some part of the administration block, in the process destroying records of all students that have passed through the school.

Thereafter, the school was later renamed Government Comprehensive Secondary School, Dadin-Kowa. But apart from a change of name, the structures and academic activities have not seen any improvement.

When our correspondent visited, parts of the school buildings were seen in various stages of collapse and ruin. The four blocks of hostels are completely unusable.

Daily Trust learnt that the school authorities were forced to convert some of the classes to be used as students’ hostel. The bats infested classes have no beddings, therefore the students sleep on mats spread on the floor.

The other available classes that are still in use have cracked walls, making learning in them very risky.

Moreover, it was observed that the school’s toilets are not functional, as such both teachers and students have to go to a nearby bush to relieve themselves.

A teacher who spoke under condition of anonymity said the school has a population of 847 students for the SS I, SS II and SS III classes, but only has 14 teachers to teach the 14 subject offered.

He added that all eight non-teaching staff and five cooks that work in the school’s kitchen are casual staff paid from the little resources generated by the management.

Daily Trust learnt that due to the poor state of the school, newly posted teachers and other staff decline to report, preferring to lobby for transfer to one of the newly renovated or recently established schools.

“For instance, only two teachers borrowed from the Local Education Authority (LEA), teach Agricultural Science and Mathematics respectively to all the classes from SS I to SS III.

Principal of the school, Saidu Aliyu said the school is facing myriad challenges including shortage of staff and security, as the unfenced school is at the mercy of hoodlums who attack students at night and make away with their belongings.

“Apart from lack of furniture as most students sit on bare floor, the entire school is in need of total renovation. The hostels are not conducive for boarding students because they are dilapidated, also the staff quarters are not in good condition,” he said.

The principal appealed to Governor Muhammad Inuwa Yahaya to come to the aid of the school by renovating the dilapidated buildings and addressing other challenges.

Efforts to speak to officials at the ministry of education proved abortive. The Permanent Secretary in the ministry, Malam Bello Bappaji, said he could not comment on the matter.

“I will not speak to you because we did not give you the approval to visit the school and write a report. But you may contact the commissioner, if you wish,” he said.

Also, at the time of filing this report, the Commissioner of Education, Dr Habu Dahiru didn’t take calls placed to his phone. He also did not reply a text message sent to him.

In their silence, the students of this once glorious school continue to languish at the mercy of bats and hoodlums.