Under Fire: Story Of Abuja Communities Threatened By High-Power Cables


The story has been told of the Abuja communities that are currently threatened by high-power cables. 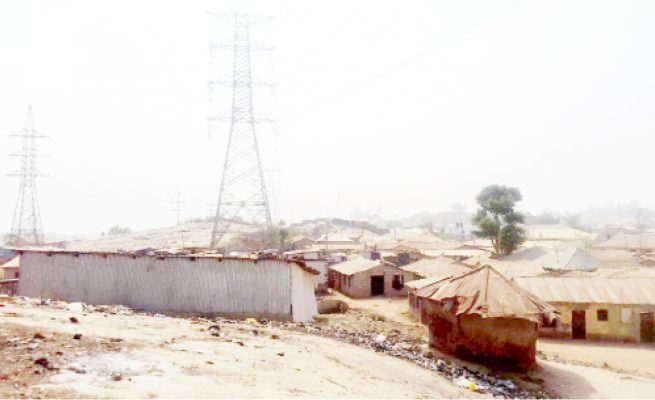 Thousands of Abuja residents live under high tension power lines. To these people, electricity sparks in a ‘normal’ occurrence. Some of the residents said though there are sparks from the power line, nobody had died from electrocution in their areas while some believe that there is no electricity running through the power line.

In Karu, one of Abuja’s sprawling satellite towns, hundreds of people reside under or near power lines. They plan going nowhere insisting that the government should relocate the high tension power lines instead.

Another resident, who identified himself as Dr Dom said the high tensions were already laid before moving into the house. He alleged that the government ought to have moved the power line to another location as its present location is developed with several houses and occupants.

“This is a matter of life and death which the government is treating with kids gloves which should not be so because every life is important. I hardly sleep at night especially when there is heavy wind due to fear that a pole might fall,” he said.

Mr Linus Okeke said despite the risk, which he acknowledged could lead to loss of lives, he, however, says he would not relocate, “It is advisable to leave the vicinity but we cannot because some of us built our houses and we cannot just abandon it like that.”

Another occupant Mrs Tessy Ajakaye said, “The lines were mounted years back and then we were so ignorant of the impending dangers attached to it. But now, we have full knowledge of it because we see how it sparks regularly and sometimes ignites.

“We have complained to regulatory bodies and our district heads but nothing tangible have been done to avert this. They keep saying the lines were enacted by machines and cannot be uprooted easily but can be shifted but it will cost a whole lot except the residents are willing to contribute money,” she said.

Mrs Ajakaye plans to stay in the same location despite the challenges because “I do not have money to start relocating to another place,” she said.

Rev. Yusuf Chetubo, who had stayed in the area for over a decade said when the power tension lines were mounted, they had thought it would bring development to the area ignorant of its inherent dangers.

“Seeing the havoc it is causing, our lives are in danger and we are appealing to the government to come to our aid because we are at risk of getting electrocuted,” he said.

The Nigerian Electricity Regulatory Commission (NERC) safety regulation titled, ‘Nigerian Electricity Supply and Installation Standards Regulations 2015’ stipulate that for a 330kV transmission line, a 50-metre distance split equally must be maintained on both side of the lines before erecting structures. For the 132kV transmission line, the distance is 30 metre. For the power distribution side, 33kV and 11kV lines must have both sides distance of 11 metre.

“For safety reasons, no structures shall be built under the overhead line Right of Way (RoW). Where such structures are built after the construction of the lines, the licensee shall not be liable for any mishap caused by contact with the line,” the law further stated.

While some Karu residents demand compensation from the government before relocating, people in Tundun Wada, Lugbe had their houses marked by the Transmission Company of Nigeria (TCN) for demolition for building under the power line. Over two years since their homes were marked they await the imminent demolition exercise. They had averred that the compensation must be paid before the demolition while they remain in their houses.  The Federal Capital Development Authority (FCDA) described the structures as shanties, residents said their houses were not shanties but buildings.

The chief of the community, Muhammad Usman said more than 750 houses are built under the power line while there were several others to be demolished for the construction of a 330/132/33KV substation. He said they had been living in the area for over 20 years. The chief said though it was dangerous for houses to be built under the high tension, “but it has not killed anybody in the past because there was no power supply in the high tension cables.”

The residents were not bothered by the risks but the compensation to paid by the government. One of the residents that had lived in the area for about six years, Simon Okuma, said he paid some money to an FCT native to purchase the land where he built his building.

“Government cannot just come and push us away from where we are living without adequate compensation,” adding that compensation had to be paid before they vacate the area.