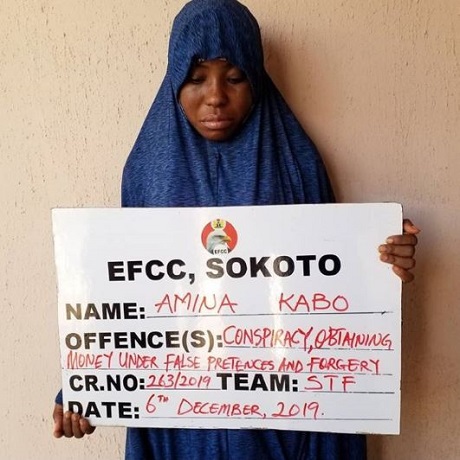 The Zonal Head of Economic and Financial Crimes Commission (EFCC), Sokoto, Kebbi and Zamfara states on Friday paraded 27 years old lady,  Fauziya (Amina Kabo) over fraudulent business involving the use of her unregistered Olive Micro Finance bank which she uses to collect monies from unsuspecting victims.

According to the EFCC Zonal head, Abdullahi Lawal, the said Fauziya Kabo had collected eight hundred and ninety-seven thousand, five hundred naira  (897,500,00) from 108 victims within 2 days of running the said bank.

Amina and one of her accomplice now at large had operated same fraudulent microfinance bank in Jega and Gwandu local government areas of Kebbi State. The bank, Olive Micro Finance is located at No 26 Dubabe Plaza, opposite Asibiti, Eastern Bye Pass Road, Tamaje area of Sokoto metropolis.

Briefing newsmen at the Sokoto office of EFCC, the Zonal Head, Abdullahi Lawal said, Fauziya Kabo had promised very enticing loan windows for those who fell prey to her fraudulent ploy.

According to the EFCC Zonal Head, “The suspect, Fauziya alongside three others who she employed were alleged to have been collecting monies ranging between 5000 to 10000 from unsuspecting victims under the guise of opening accounts for them with a view to granting them loans in the following categories.

While advising members of the public to be very weary of such phony financial institutions, Lawal assured that the suspect will be charged to court as soon as investigation is completed.