Fire sweeps through multi-storey building as factory workers slept inside in a congested area of India's capital. 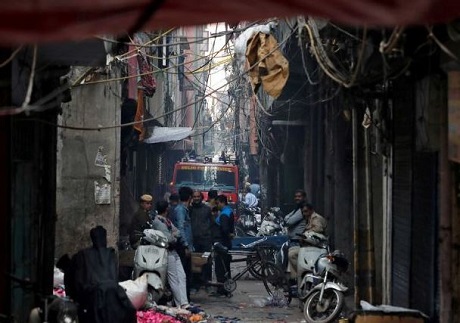 A large fire has swept through a bag factory in the Indian capital Delhi, killing 43 workers, officials say.

The blaze broke out at the four-storey building in the city's congested old quarter early on Sunday morning.

At least 100 people were sleeping inside the factory, which mainly makes school bags, when the fire started. More than 60 have been rescued.

Delhi's firefighters received the first call about the fire at 05:22 local time on Sunday (23:52 GMT Saturday).
'Cries and shouts for help'

The fire began on the lower storeys, spreading rapidly to the third floor where workers were sleeping.

"We woke up with cries and shouts for help," said Ronak Khan, a 17-year-old living next door.

"I saw people trapped. We asked them to come to the rooftop so that we could rescue them but they were not able to come up." 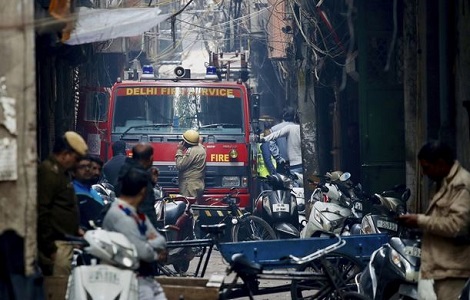 The area where the factory is located - Azad Market - is a web of narrow alleyways, which made it difficult to reach the blaze.

Rescuers had to carry out victims on their shoulders one-by-one with firefighters cutting away window grills to access the building.

A local fire chief told BBC Hindi's Dilnawaz Pasha the building did not have a proper fire licence and was operating illegally as a factory.

It is not clear what caused the blaze but an investigation has been ordered.

An initial probe and eyewitnesses suggested a short circuit may have been to blame.

Victims' relatives have been scrambling for information. One man told India's PTI agency his brother was inside. 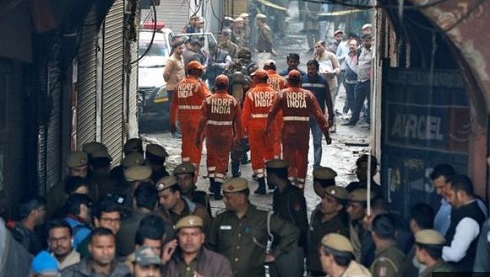 "I got a call from his friend informing that he has been injured in the incident. I have no clue which hospital he has been taken to," he said.

Indian politicians have been expressing their horror at the blaze.

"My thoughts are with those who lost their loved ones. Wishing the injured a quick recovery. Authorities are providing all possible assistance at the site of the tragedy."