I Looked Past Joshua; Thought It Would Be Same As June 1st - Andy Ruiz Laments


The few times Ruiz caught Joshua with flush punches, the Imperial, California, native couldn't hurt Joshua the way he did during their initial battle. 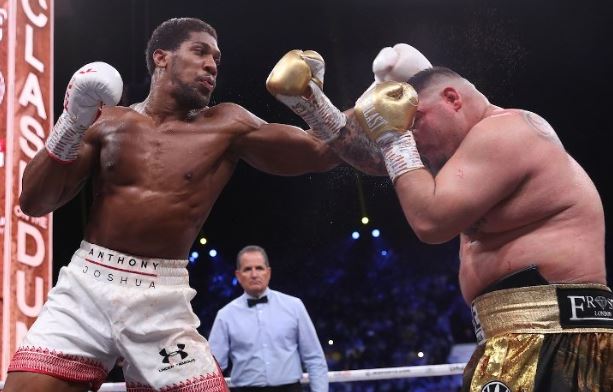 Yes, you read that correctly.

Among the things Ruiz admitted in the aftermath of his loss to Joshua in their immediate rematch was that he “looked past” Joshua. After flooring Joshua four times on his way to a stunning seventh-round stoppage in their first fight, Ruiz figured something similar inevitably would happen when they met again at Diriyah Arena in Diriyah, Saudi Arabia.

The few times Ruiz caught Joshua with flush punches, the Imperial, California, native couldn’t hurt Joshua the way he did during their initial battle.

The 30-year-old Ruiz regrets the way he prepared for their second bout, which led to him weighing in 15½ pounds heavier than he weighed for their first fight June 1 at Madison Square Garden in New York.

“I just should’ve trained harder, you know?,” Ruiz told BoxingScene.com in a post-fight interview. “There’s no excuses. I think I looked past him. I thought it was gonna be the same thing [as] June 1st. But we did work on some things. But I think for me, being a little heavier – well, a lot heavier – I didn’t perform my best.”

Ruiz’s father and his trainer, Manny Robles, warned him to focus on training while he was busy enjoying the fame and fortune that accompanied his huge upset. The former IBF/IBO/WBA/WBO champion simply didn’t listen to them.

“There’s a lot of things they were telling me,” said Ruiz, who lost for just the second time in 10 years as a pro (33-2, 22 KOs). “I just think the fame got a little to me. You know, I’m just happy to be here. I’m happy that I was the first Mexican heavyweight champion of the world. And I’m gonna learn from my mistakes and, you know, I’ve just gotta bounce back. I’ve been through so many roller coasters in my life, and this is one of ‘em. And I’ve bounced back before. I’m gonna bounce back again.”

Keith Idec is a senior writer/columnist for BoxingScene.com. He can be reached on Twitter @Idecboxing.