Who Took Away Baby Gold? - The Story Of 1-Year-Old Boy Who Disappeared During Church Service


The story has been told of the 1-year-old baby boy who disappeared during church service in Akure. 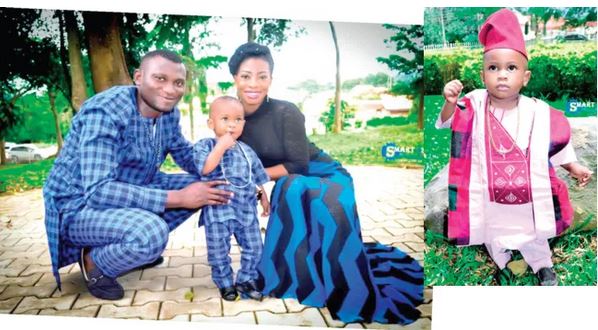 On November 10, 2019, Gold Kolawole, a one-year-old boy could not return home with his mother after Sunday church service, following his mysterious disappearance from their church of worship at Sotitobire Miracle Centre, Akure, in Ondo State. ADEWALE MOMOH reports

For the Kolawoles, November 10, 2019, a Sunday began just like any of the worship day when they sought the face of God for the family and as well as given thanks to Him for His watch over the family of three.

Not minding the distance of over 48 kilometers, every Sunday, they journey from their residence in Ondo town in Ondo West Local Government Area of Ondo State to worship at Sotitobire Miracle Centre popularly known as ‘Ipe to Shaana (Strong Calling), Oshinle Quarters in Akure, the state capital.

Their weekly routine suddenly turned awry on November 10 when the place that has served as a sanctuary for them and a safe haven became a dreadful zone following the disappearance of the only child of the young couple, one-year-old Gold Kolawole.

Gold has been missing for the past three weeks, a situation which has continued to rattle the family and the state at large as to how a child could have disappeared from one of the most popular churches in Ondo State without trace.

According to sources within the church, the boy who was at the children’s department of the church could not be found after Sunday’s service on November 10, 2019, when his mother went to pick him.

The mother of the boy, Mrs. Modupe Kolawole, a member of the Church, alleged that she suspected foul play over the mysterious disappearance of her son from the church.

Mrs. Kolawole explained that the children’s department of the church where her son went missing is being guarded by 14 teachers, adding that some of the members of the church told her that they saw her son in the vehicle of the church’s founder, Prophet Babatunde Alfa.

She further alleged that when the issue was raised with the Prophet, he showed no remorse as he did nothing to help in the search of her son, adding he denied ever setting his eyes on the child that very day.

Mrs. Kolawole also explained that despite reporting the kidnapping to the church authorities and B Division police station, Oke – Aro as well as Anti-kidnapping office at Alagbaka, Akure, nobody had been arrested or interrogated by the police.

“They have been advising me in the Church for so long that I should take my child to the children section but I refused because I felt that he is too young because he has not started walking and on that Sunday, I decided to take the child to them at the Children department. Maybe, when he even saw some of his mates, there may be that would even help to start walking soonest.

“I decided to drop him there and I registered his name in their register as number 87 but after an hour, I went back to go and check on him but he was not facing where I left him. They have turned his chair to a lady who I  think is part of their worker and I saw my child with buns and I challenged them that they should not give my child anything and I told the head of children department that there is nothing you wanted to give the boy that you won’t get inside his bag.

“I went back to the Church and when it was 11:45 am, I could not find my child again and I now started shouting that where is my child and they told me I should go and find him among 200 children there and someone among them said maybe someone has taken him out to play and I now said I don’t have any friend in the Church that can take him out without my consent.

“When it was around 3pm, I started harassing the church by checking on their children’s faces and when it was 5 pm that day, they ended the service and they reported the matter to Pastor and he said I should not worry that they will see my son.

“He even told me and my husband that we should go home and sleep; that we should not make noise. Later, I called my sister and I reported everything to her and she rushed down from Ondo town to Akure and we all started looking for him.

“I personally went to Sotitobire and starting begging him that the missing of my child occurred in your Church and said we will see him and up till now, we have not seen him.

“As am talking to you now, Alfa Babatunde, Sotitobire has not called me; nothing has been done to get my child back. I want my child. If I see my child, I will end the case. I am begging everyone to help me find the child.”

She, however, called on relevant authorities to come to her rescue as she cried out that Prophet Alfa has been using his connection to silence them as well as prevent security operatives from investigating the issue.

According to her, she confirmed that the paternal grandmother of the boy, Mrs. Kemisola Kolawole was arrested and detained by the police Anti-kidnapping Squad (SAKS).

She stated that her mother-in-law, who had been released was arrested following a peaceful protest at the church premises by family members, friends, and sympathizers over the incident.

The boy’s mother, Modupe lamented that nobody had been invited within the church by the police since the incident occurred.

She also stated that the family’s lawyer had already written a petition to the State Commissioner of Police to intervene in the matter.

“It is unfortunate that the police that supposed to be protecting citizens, is being used to harass citizens. My mother-in-law was arrested and detained. They didn’t allow us to see her throughout the period.”

Meanwhile, Prophet Alfa, who finally spoke to New Telegraph after days of ignoring calls and messages sent to his phone denied the allegations.

According to Prophet Alfa, who admitted that Gold went missing in his church, disclosed that the boy’s parents had not been cooperative towards finding the missing children.

“I was informed of the development around 3 pm that very day and I immediately directed all the ministers in the church to go to the children’s department find out the situation of things and as well search for the missing child.

“Later around 5 pm after the service, I saw the parents and the mother of the child was weeping profusely. As General Overseer and Prophet, I had to intervene. I also informed them to report the situation at B’ Division police station. After reporting the incident, the DPO told them to come by 10 am the following day but they refused to go back there. I also called them to come to the church but they also refused.

“I later called those in the children department who narrated all that happened to me. They told me that the lady and her sister brought the child to the children section. They also said it was the sister that was feeding the missing child before the incident happened. I called her and told her what I gathered.

“I was surprised when I began to hear different stories about me as regards the missing child.

“It was during this issue that we learnt that about a year ago that the boy when he newly gave birth to was kidnapped alongside his father. We were told that it was one of their aunts in the UK that paid about N1.5 million as ransom.

“Around 6 pm on Monday, I received a call that the family of the missing child were already in the church vandalizing anything they could lay their hands on. They were armed with cutlasses and petrol.

“I’m certain about one thing, where there is no man, there is Jesus Christ. They are not concerned about looking for their missing baby. All they are out to achieve is to tarnish my name.

“On Tuesday morning, they went straight to the market here in Akure with cardboards (placards) telling people what I didn’t know any about. Even at the Deji’s palace, they sent for them but they didn’t show up.”

Confirming the incident, the State Police Public Relations Officer (PPRO), Femi Joseph, who said investigation had commenced into the matter, as he assured that detectives from the state command would rescue the toddler alive.

Joseph, however, explained that there was no formal report of the incident from any quarters, based on the understanding between the parent of the missing boy and the church leadership.

The PPRO said the leadership of the Church reported the incident the following day when the father of the missing boy, Temitope Kolawole allegedly mobilized some thugs to the church and destroyed the church property and were about setting the church on fire when police were mobilized to the scene.

He appealed to some of the aggrieved relatives of the victim who invaded the church not to take the law into their hands, urging them to allow the security agents to carry out their investigation.

Similarly, the Police Command has appealed to the citizens of the state to avail the police of any information that will assist in finding the missing child.

The statement issued by the PPRO read, “The Ondo State Police Command wishes to inform  the general public especially the good people of Ondo State about the sudden and unfortunate disappearance of a little boy by name Kolawole Gold who was last seen in a church program holding at Sotitobire Church, Oshinle Quarters Akure  with his parents Mr and Mrs Kolawole on 10 November,2019 at about 11:30 a.m.

“The boy, who is One year Old and light skinned can Speak and understand Yoruba and English languages.

Meanwhile, there have been outcries from various quarters over the development particularly when half-naked women were sighted in the church, cursing those perceived to be behind Prophet Alfa’s predicament.

Some residents of Akure were of the belief that Prophet Alfa ought to have used is prophetic calling to locate the whereabouts of missing Gold.