President Muhammadu Buhari's kinsmen have reportedly knocked the First Lady over the brewing crisis in the villa. 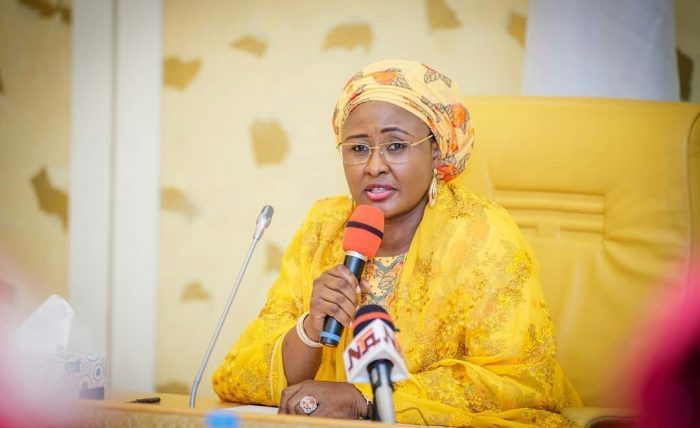 Kinsmen of the President, Major General Muhammadu Buhari (retd.), have faulted his wife, Aisha, over her Wednesday’s statement, which attacked the  Senior Special Assistant to the President, Garba Shehu.

The kinsmen in Daura, in separate exclusive interviews with the Kastina State correspondent of The PUNCH,  on Wednesday evening, berated Mrs Buhari for making what they called a purely  private family affair, public.

Mrs Buhari,  had in the statement on Wednesday morning,  said, “It was Garba Shehu,  who claimed that the government would not allow the office of the first lady to run.  He was later to confirm to one of my aides that he was instructed to say so by Mamman Daura and not the President. This antic attracted the anger of Nigerian women. He didn’t realise the fact that the first lady’s office is a tradition which has become an institution.”

Commenting on the statement by Aisha Buhari, residents of Daura, the home town of the President, said the first lady should have reported the matter to her husband.

The Chairman of the Coalition of Associations in Daura, Mallam Muhammed Saleh, in an interview with The PUNCH, said Mrs Buhari’s feud with Shehu should be seen as a pure private affair.

He said that the outburst by the wife of the President was not good enough. According to him, attacking Shehu was akin to attacking Buhari.

Saleh said, “I try as much to refrain myself from commenting on the issue as some people are bound to misinterpret whatever one says on the issue. But I need to stress that this is a family affair which should be resolved.

“Attacking  Garba Shehu who is the spokesperson for the President is akin to attacking the President himself and I think , this is not good enough. I will urge all of them to resolve  any issue at stake privately.”

Aisha is giving wrong impression of her husband – Daura elder

But another elder in Daura, Alhaji Usman Kalgo, said the first lady’s public outburst on  Shehu was an insult to  Buhari.

Kalgo said, “ If Aisha sees any shortcomings on the part of Garba  Shehu or any other person working for her husband, the best person to complain to is her husband and not making the issue public.

“The President knew that Garba Shehu  was competent before giving him the job of a spokesman and if there is a feud between Aisha  and him or any other person, Aisha should respect her husband. She should   report Shehu to her husband and not making it public. By making the issue public, she is giving a wrong impression of her husband, which is not good enough.”

A lawyer, who is an indigene of the town, Ado Lalu, said the wife of the President’s approach of making the issue public would not solve the problem.

Lalu said the feud between the first lady and  Shehu or any other person in the Presidency ought to have been resolved behind closed doors.

Lalu said, “Logically, attacking Garba  Shehu publicly by the first lady is not good enough. The first lady has a direct access to the President and she could have discussed the issue that concerns her with him. Making her grievances public will not help matters.

“Even if he (President) is busy to attend to her complaints now because of his tight schedule, she will always get time to discuss the issue with the  President. There are several ways of making one’s grievances known not  by making such public, which will only aggravate matters. This is a strictly private matter and should be settled privately.”

But the Spokesman for the Daura Emirate Council, Mallam Usman Ibrahim, when contacted on the phone, said, “It is a family matter and we don’t speak on family issues.”

Before the 2019 elections, the President’s wife had alleged that those who did not contribute to the election of her husband in 2015, were benefiting from the regime.

The crisis between the first lady and Daura’s family worsened in October, when the President’s nephew’s daughter, Fatima,  released a video.

Fatima, in an interview with the BBC Hausa Service, admitted that she recorded the video that went viral to provide proof for her parents and security officials about Mrs Buhari’s outburst during an encounter with the first lady.

In an interview with the  BBC Hausa Service after her return from Europe in October, Mrs Buhari  reacted to the viral video.

She said, “I was the one in the video, those behind me were the security personnel given to protect me, but Mamman Daura’s daughter, Fatima, shot the video in the presence of security officials and everybody. She was laughing at me because my husband said they should vacate the place (Glass House) for my son to occupy.”