Amazing Discovery: How A 300-Year-Old Dune Was Found With Precious Stones, Relics Of War In Adamawa


A sand dune that is as old as 300 years has been found with precious stones and relics of war in Adawama. 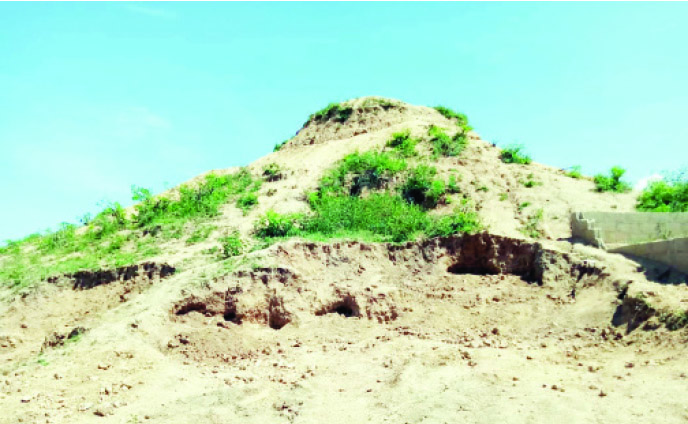 Mubi in Adamawa State has been notorious for Boko Haram attacks in the past. At the peak the insurgents sacked communities, dislodged hundreds of residents and forced the closure of Adamawa State University and the Federal Polytechnic, Mubi for about a year.

However, the city has since risen from the ashes of its dark past. Since 2015, many things have happened for good in the town. The shut tertiary institutions have re-opened and the kids are back to school. The comatose businesses are revived and the famous cattle market, once abandoned out of fear, has swung to full action.

But while all these heart-warming events are indeed taking place, a discovery of uncommon sort has since returned the town to the lips of conversations beyond its shores. A discovery of a sand dune containing precious stones and relics of the ancient communal war by some local construction workers in Geshaka town in Lamorde has sparked off a new reasoning.

In a way, the finding has filled the town with excitement, expectations and apprehension. Many are convinced there would be negative consequences whose nature they could not predict as the dune has been desecrated and violated. Others, however, insisted that the discovery would surely lead to widening the vista of Mubi town in the days to come.

Jauro Dauda Tkilama, 80-year-old village head of Lamorde told Daily Sun that the construction of dune could be as old as over 300 years ago: “The story of the structure was one of those oral traditions handed over to us by our grand parents who themselves, did not build it.

“Our forefathers told us that when this town was established, they made enchantments to make this land flourish, to bring about prosperity and protect its inhabitants. Part of the enchantments involved burying some of the riches of our land, which protected us from any evil plan, protecting our land against our enemies and causing Mubi town to be prosperous.

“Historically, we used to have locust plague that ate up our crops. These ancient people were like some prophets then. They met among themselves and agreed that this town was big and important. They had to do something to protect it from evil.

“There are actually three other dunes besides the one discovered that made Lamorde and Mubi impossible to conquer. They also protected people and ensured prosperity. We were told that in the era when markets were the hub of economic activity in towns and villages, all the villages surrounding Mubi, made this place their market destination, regardless of the distance and inconvenience. They would always come to Mubi to trade because of what our parents did.

“The dune excavated contained precious stones and relics of the communal wars. If you look at it carefully, it looks like a granary. The precious stones were kept in the first layer of the granary and several other layers were built over it to hide it from the enemy.

“The idea behind that one was that when they went to war and returned, the wealth that makes the land, would still be safe and inaccessible to the enemy. I cannot the age of the dunes. None of us could say exactly because even our fathers were only told about it. But it should be over 300 years old.

“The family of Iliya Kaigama is among the families in Mubi who are the custodians of these sites’ rituals. That was why every king of Lamorde pays homage to the family.”

Are they worried at the sudden excavation of the site? The old man replied: “We are not sure specifically what will happen but certainly we are all afraid that something sinister could happen

“You see the mountain over there?” He asked pointing: “Then it was only accessible to Lamorde people and those who speak its native tongue of Gude. If you attempted climbing it, the mountain would reject you.

“Here in Lamorde, there are two of these dunes. They were built with stones and we have been fighting those who come here to take the stones.

“This one here is called Lara. It is the home of demons and dangerous spirits. According to our history, they have been responsible for multiple deaths and road accidents.

“The one discovered and looted is called Morghiha. The third of these historical sites is called Magu’aiwa. It is a site of protective enchantment against locust invasion. In fact, until recently when some recalcitrant youths went to the top of the mountain to farm, no one has ever encroached on it for farming activity.

“We are calling on the Emir of Mubi to help us preserve this area. We will like government to secure this site, have it fenced and those responsible for preserving this culture should take heed and keep this place for posterity before the real history would be gone forever.”

Dahiru Saidu, a commercial taxi driver and resident of Mubi held: “This is a surprising thing to us. When we heard about the place, I, like every other curious resident of Mubi went there for sight seeing. Honestly speaking, I just stood outside I was afraid because of the stories I heard about places like this.

“A teacher told us sometimes ago that it might be an ancient tradition that when people die, their families make special places like caves to bury them so that the body of their loved ones would not be mutilated by wild animals. We were told that people were buried with some cultural relics, like pots.”

Another resident of Mubi, Danladi Chambers, explained: “It so astounding that these cultural relics were found in that ground not damaged and the details in which they were preserved is beyond comprehension.

These are the kinds of sites that should be preserved and promoted for tourism because this is an important part of Mubi history.”