Usman said as a result of the convict's action, the deceased sustained serious injuries and was rushed to the Misau General Hospital. 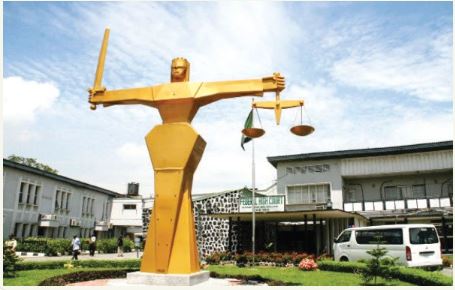 A Bauchi State High Court has sentenced a middle-aged man, Umaru Jauro-Ori, to death by hanging for killing his father inside a mosque in Mai’aduwa Village, Misau Local Government Area of Bauchi State.

Justice Aliyu Usman found Umaru guilty of culpable homicide after reviewing the testimonies of witnesses and listening to the final addresses of both the prosecution and the defence counsel.

In his judgment, Usman said, “The death of the victim was as result of the act of the accused and the prosecution counsel has proved their case beyond reasonable doubt; the accused is hereby found guilty of culpable of homicide, an offence that is punishable by death under Section 221 of the Penal Code. I, hereby sentence him to die by hanging.”

Earlier while reviewing the case, Justice Usman held that the State Chief Counsel, Hussein Magaji, told the court that the accused went into a mosque in Mai’aduwa and struck his father in his head and back with a cutlass.

Usman said as a result of the convict’s action, the deceased sustained serious injuries and was rushed to the Misau General Hospital, where he died the following day from the injuries he sustained from the attack.

The judge also noted that Umaru denied the charges and pleaded not guilty during trial, but the prosecution counsel brought 10 witnesses who, in their separate statements as recorded by the police during investigation, testified that the convict killed his father.

He also noted that a brother to the deceased, Umar Jatau, 70, and the convict’s brother, Ibrahim Jauro-Ori, 26, stated that Umaru had a problem with his father and other family members.

The judge also said the witnesses told the court that the deceased shared with the convict and his brother their inheritance, after which Umaru left the village for over 10 months with nobody knowing his whereabouts, until the day he came into the mosque while they were praying and stabbed his father.

The witnesses told the court that the youth in the area pursued the convict, apprehended him and took him to the police station.

They said that the deceased was rushed to the hospital but died while receiving treatment and his body was released to them for burial according to Islamic rights.

Umaru, in his statement to the police, said he was married to one wife and was blessed with three children, adding that he killed his father because he separated him and his wife after he travelled and stayed for a long time.

He stated, “When I returned, I took a machete and entered the mosque, where my father was praying, and stabbed him in his head and back, and he fell down. I ran away and the youth pursued me, apprehended me and beat me mercilessly and injured my right fingers.