An All Progressives Congress chieftain in Delta state has been kidnapped by unknown gunmen. 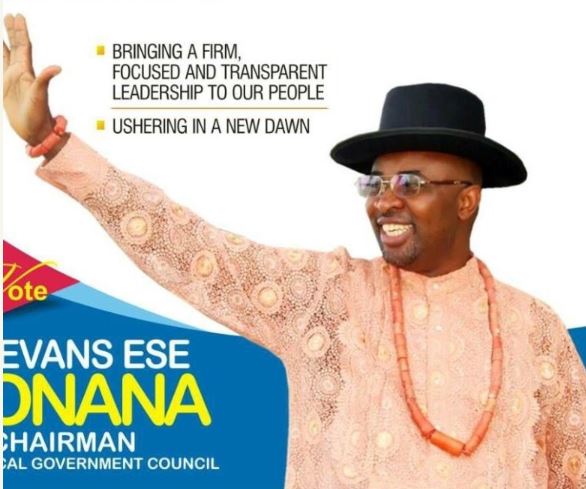 Evans Odibo Akponana
A chieftain and former Ughelli North Local Government Area chairmanship candidate of the All Progressives Congress, APC in Ughelli, Delta State, Evans Odibo Akponana has reportedly been kidnapped by unknown gunmen.
According to an eyewitness, the Kidnappers laid ambush around his country home in Afiesere town awaiting his arrival and immediately opened fire at his vehicle which unfortunately hit his security guard.
Akponana tried to escape with bullet wounds he sustained but was overpowered by his abductors who absconded with him leaving behind the corpse of his murdered security guard and a frightened neighborhood.
Reports gathered revealed that the operation was a failed assassination attempt on the chieftain over a degenerated community issue bordering on having a constitution and opening a community bank account for accountability.
Police officers have removed the corpse of the deceased security man.
The abductors of the chieftain reportedly established contact with the family demanding for a whopping N30m ransom.
Top Stories