EFCC's acting chairman, Ibrahim Magu stressed the commitment of the agency in the recovery of stolen funds wherever they are. 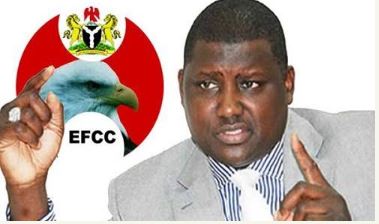 The Economic and Financial Crimes Commission (EFCC) and the Independent Corrupt Practices & Other Related Offences Commission (ICPC), Nigeria’s two key anti-corruption agencies, have always emphasized on the recovery of stolen assets as key in the fight against corruption.

EFCC’s acting chairman, Ibrahim Magu, while interacting with the Speaker of the House of Representatives, Femi Gbajabiamila, in September, stressed the commitment of the agency in the recovery of stolen funds wherever they are.

However, not long after that, reports emanated that the Attorney General of the Federation (AGF) and Minister of Justice, Abubakar Malami (SAN), had whittled down the assets recovery powers of the EFCC and ICPC, but he was quick to dispel that report.

Findings by this newspaper revealed that a former Minister of Petroleum Resources, Mrs. Diezani Alison-Madueke, had about N86bn worth cash and assets linked to her permanently forfeited to the federal government.

In the court’s ruling, Justice Nicholas Oweibo held that Diezani, through her lawyer, Awa Kalu (SAN), failed to show cause why the items should not be permanently forfeited.

The EFCC had told the judge that the jewellery and gold iPhone were reasonably suspected to have been acquired with proceeds of fraud.

According to the schedule attached to an application filed by the EFCC, the expensive jewellery, categorised into 33 sets, include; 419 bangles, 315 rings, 304 earrings, 267 necklaces, 189 wristwatches, 174 necklaces and earrings, 78 bracelets, 77 brooches and 74 pendants.

In 2017, four permanent forfeiture orders were issued against the former petrol minister.
On October 11, 2017, Justice Abdul-Azeez Anka of a Federal High Court in Lagos ordered the permanent forfeiture of 56 houses situated in Lagos, Port Harcourt and Abuja valued at $21,982,224 (about N6.7bn) allegedly linked to her.

During proceedings leading to the order, the EFCC counsel, Rotimi Oyedepo, while moving the application, noted that the money was part of the sums allegedly diverted by the former minister from various units of the NNPC.

Oyedepo further claimed that the anti-graft commission published an advert after the court ordered the money’s temporary forfeiture but no one claimed its ownership.

An investigating officer with the commission, Usman Zakari, in a supporting affidavit attached to the application, stated that the former minister held a meeting with a bank chief in her office informing him that some officials of her ministry would be bringing funds to his bank.

According to him, the minister directed that the funds must neither be credited into any known account nor captured in any transactional platform of the bank.

Earlier on February 16, 2017, Justice Muslim Hassan of the Federal High Court in Lagos ordered the permanent forfeiture of $153.3m (about N47bn), which was said to have been diverted from the coffers of the NNPC by the former minister. The EFCC had traced the money to three commercial banks in the country where it was kept.

Former first lady, Patience Jonathan, also had battles with the EFCC over the forfeiture of N9.2bn and $8.4m (about N2.6bn). The order of interim forfeiture of the funds went up to the Supreme Court, which ordered her to return to the court to challenge the forfeiture.

However, on June 1, 2019, Justice Mojisola Olatoregun of the Federal High Court in Lagos ordered the permanent forfeiture of the funds to the federal government.

The EFCC told the court that the funds were reasonably suspected to be proceeds of crime. Though Patience, through her lawyers, Chief Ifedayo Adedipe (SAN) and Chief Mike Ozekhome (SAN), opposed the application and insisted that the funds were legitimately hers, the judge held that she had no doubts at all that the monies were proceeds of unlawful activities.

A Federal High Court in Ikoyi, Lagos, on December 2, 2019, ordered an interim forfeiture of two houses in Ilorin, Kwara State belonging to the immediate past Senate President, Bukola Saraki.

The EFCC had approached the court presided over by Justice Ridwan Aikawa for an order of interim forfeiture of the properties said to worth about N1bn on the grounds that they were acquired through proceeds of unlawful activities.

However, Saraki, through a statement by his Special Adviser on Media and Publicity, Yusuph Olaniyonu, said the application leading to the order was an abuse of court process and a violation of a subsisting order of the Federal High Court, Abuja restraining the commission by themselves, their subordinates, agents, servants, or privies whosoever, from seizing, impounding, taking over, confiscating or otherwise forfeiting his right to own and peacefully enjoy any of his assets and properties.

On September 26, 2019, Justice Folashade Ogunbanjo-Giwa of the Federal High Court in Abuja ordered the permanent forfeiture of some assets returned by a suspect linked to a former Head of Service of the Federation, Mrs. Winifred Oyo-Ita.

Oyo-Ita was placed on indefinite suspension over corruption allegations launched against her by the EFCC and while moving the application for the forfeiture, the anti-graft agency’s lawyer told the court that the funds were voluntarily returned to the commission as proceeds of crime by the unnamed suspect.

While details of the case were not read out in the open court, the EFCC lawyer informed the judge that the money had been paid into an account with the Central Bank as soon as it was returned by the suspect.

Earlier in September, the EFCC revealed that it obtained orders for the interim forfeiture of assets traced to a former governor of Imo State, Rochas Okorocha, his wife, Nneoma Nkechi and their daughter on August 22. The order was got from a vacation judge, Justice A. T. Mohammed of the Federal High Court, Port Harcourt.

The Head, Enugu Zonal Office of the commission, Mr. Usman Imam, who disclosed this, added that the EFCC also obtained a similar order on a property, Dews of Hope Hospital, traced to a former aide to Okorocha, Mr. Paschal Obi, and the former governor’s daughter.

He listed some of the properties to include a 16-block 96-flat structure and an eight-bungalow multi-million naira estate, hotel, two schools, shopping plaza, supermarket, hospital and four vehicles.

The EFCC chief said while the hospital was traced to Obi, the remaining properties were traced to the former governor and his family, including his wife and daughter.

The EFCC made headway on the permanent forfeiture on December 6, 2019, when Justice T.G Ringin of a Federal High Court sitting in Owerri, ordered the final forfeiture of Dews of Hope Hospital, a N1.5bn state-of-the-art 200-bed hospital allegedly owned by Obi.

The commission said its investigation revealed that Obi, a former Permanent Secretary and Principal Secretary to then governor Okorocha, was a signatory to the accounts of the hospital.
It also revealed that there was evidence that the facility may have been acquired through proceeds of illicit activities, as funds from the Government House in Owerri were traced to the hospital.

Obi, now a serving member of the House of Representatives and a member of the board of the hospital, reportedly denied ownership of the medical facility.

The EFCC said the managing director of the hospital on invitation could not also explain how the hospital was funded.

Following the conviction and sentencing of Jolly Nyame, a former governor of Taraba State, an Abuja court presided over by Justice Adebukola Banjoko, also ordered that all the funds previously recovered by the EFCC from aides to the ex-governor and other government officials involved in the scam be forfeited to the Taraba State government.

A former Group Managing Director of the NNPC, Engineer Andrew Yakubu, has also forfeited to the government, $9.7m and £74,000 allegedly stashed in a fireproof safe.

The Federal High Court in Kano presided over by Justice Z.B Abubakar on February 13, 2017 ordered the interim forfeiture of the funds that were uncovered on February 3, 2017 by operatives of the EFCC after storming a house allegedly belonging to Yakubu. The Kano court’s order has since been affirmed by the Kaduna Division of the Court of Appeal.

On November 4, 2019, the ICPC announced that it had started moves to recover N2.4bn and some landed properties alleged to have been illegally acquired and linked to a former managing director of the Pipelines and Products Marketing Company (PPMC), Haruna Momoh and his wife, Ochuko Okor.

The move was subsequent to an interim forfeiture order from a High Court of the Federal Capital Territory, Abuja to seize the funds said to comprise foreign and local currencies, stashed in multiple accounts in four different banks as well as five landed properties located in different parts of Abuja.

The Momohs have however returned to the court to challenge the order. Ruling on their application has been reserved by the judge, Justice Olukayode Adeniyi, to a date to be communicated to the parties.

The Federal High Court in Abuja on October 22, 2019 ordered temporary forfeiture of 23 properties linked to a former chairman of the Pension Reform Task Team (PRTT), Abdulrasheed Maina. According to the EFCC, the temporarily forfeited properties are in Kaduna, Borno, Sokoto and the Federal Capital Territory (FCT).