Inspired by midfielder Kevin De Bruyne, Manchester City strolled to a 3-0 win over a lacklustre Arsenal in the Premier League on Sunday. 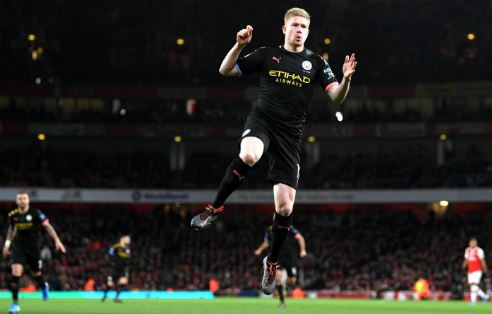 The Belgium midfielder scored two high-quality goals and provided an assist for Raheem Sterling in a one-sided victory for City.

Arsenal remain in ninth – seven points off Chelsea in fourth spot – in a defeat that will have done little to enhance interim boss Freddie Ljungberg's prospects of landing the job on a permanent basis.

Gunners forward Gabriel Martinelli brought an early save out of City goalkeeper Ederson but Pep Guardiola's side began the rout in the second minute.

An intelligent pass from Fernandinho released Gabriel Jesus down the left flank, and he cut the ball back for De Bruyne, who side-footed a clinical half-volley high into the net.

City strengthened their grip on the game when De Bruyne rounded off a brisk counter-attack with a low ball across the box – via a slight deflection – that Sterling steered home from close range.

De Bruyne curled in City's third from outside the box five minutes before half-time after a smart pass from Phil Foden, on his first league start of the season.

Only a spectacular fingertip save from Arsenal goalkeeper Bernd Leno, on the stroke of half-time, denied De Bruyne a first-half hat-trick.

The second half was largely a non-event as City dominated possession and Arsenal, who managed one shot on target in the contest, chased shadows.

Boos and jeers from the home supporters at half-time and near silence at full-time at the Emirates summed up the current mood of the Arsenal fanbase while the visitors chanted De Bruyne's name.