Police officers have stormed a forest in Anambra state, arresting bag snatchers and a 'one-chance' syndicate. 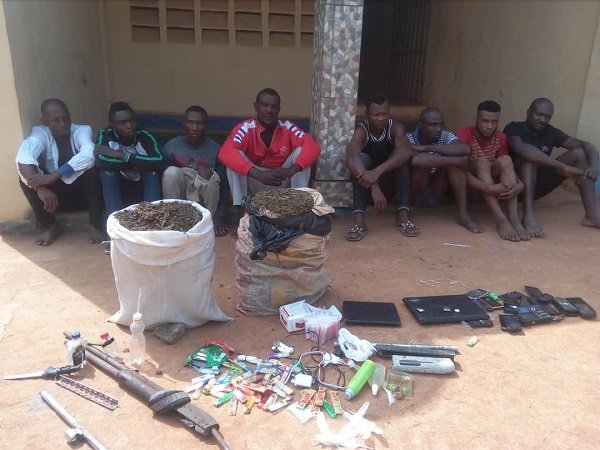 According to a report by The Nation, as many as nine robbery suspects who specialise in one chance robbery and handbag snatching have been arrested by the Anambra State Police command.

The police spokesperson, Haruna Mohammed who disclosed this on Monday, said the suspects were nabbed inside a forest at Nkwelle Ezunanka, Oyi local government area of Anambra State.

He said the suspects were part of the gang allegedly involved in series of armed robbery, phones and handbags snatching within Onitsha and its environs.

He listed the exhibits recovered from them to include arms, bags of weeds suspected to be cannabis sativa, different handsets, laptops and other incriminating items reasonably suspected to have been stolen from their victims.

He said the suspect, Arinze Ozemenam, aka Arewa of Army Barracks, Onitsha was nabbed around 1:20 pm by Police patrol team attached to Awada Division.

“Suspect allegedly wayled one Emeka Nweke ‘m’ of Nkpor and robbed him of physical cash and other belongings while returning from the Church Service at Goodness and Mercy Park,” he added.

The PPRO assured that the cases were under investigation after which suspects would be charged.

“The Commissioner of Police, John Abang enjoins the public whose handsets/laptops were either snatched or stolen through similar modus to report at the Special Anti cult unit Enugwu-ukwu with proof of ownership in order to claim their property and also give further evidence to aid Police investigation.

“The Command assures the public that it will continue to deny the criminals the opportunity to operate through intensive patrols, continuous raids on black spots and criminal hideouts and intelligence gathering in order to enable Ndi Anambra and residents alike enjoy the Yuletide peacefully,” he added.