Horror! Human Remains Found Cut Up And Stuffed In Dozens Of Plastic Bags Inside Mass Grave


Some human remains have been found cut up an stuffed inside dozens of plastic bags inside a mass grave. 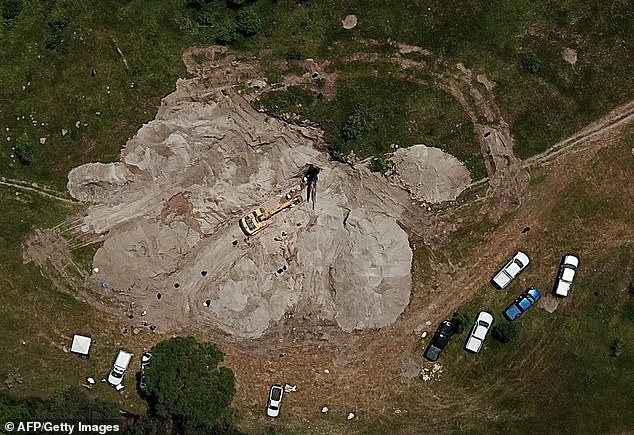 In September a mass grave (pictured) was discovered near the city inside a 100ft abandoned well - it contained 41 bodies. Today prosecutors confirmed another 50 had been found close to the same site outside the city of Guadalajara

Hacked up body parts found stuffed inside plastic bags on a farm in Mexico last month belong to at least 50 people, authorities have confirmed.

The remains were discovered outside the city of Guadalajara in Jalisco state on November 22 and forensics experts were able to come to a figure last Friday.

So far 13 individuals have been identified, 12 males and a female, all whom had been listed as missing.

The northwestern Mexican state is home to the Jalisco New Generation Cartel, considered among the most depraved gangsters in the country, their leader Nemesio Osegura Cervantes has been dubbed 'the new El Chapo.'

Jalisco state prosecutors said forensics teams would continue working to assess the identity and sex of the other individuals exhumed from the horrific mass grave.

In July, Jalisco prosecutors announced 21 bodies had been found in excavations in the yard of a house near Guadalajara.

In May, authorities discovered the remains of at least 34 people at two separate properties in the state.

And in September, 41 bodies were identified from 119 bags full of body parts found in a well near Guadalajara.

Such clandestine burial sites are frequently used by criminals to dispose of bodies.

Governor Enrique Alfaro recently said that 70% of homicides reported in Jalisco were linked to criminal organizations.