Army Cleans Up Gutters And Drainages In Ojuelegba


To mark the 2019 conference of the Nigerian Army Ordnance Corps,the officials embarked on cleaning gutters, drainages and sweeping the streets of Ojuelegba. 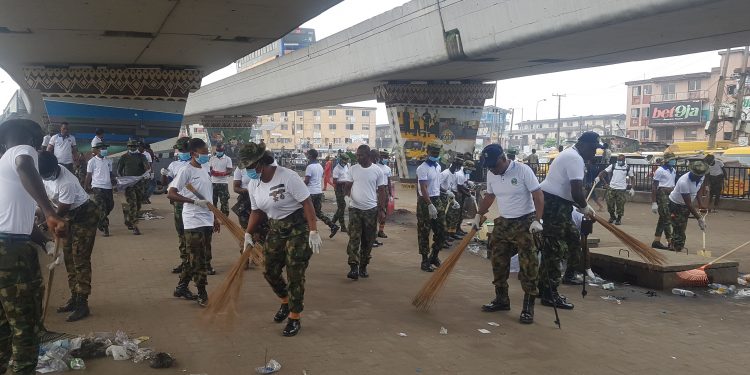 Nigerian Army personnel on Saturday stormed the Ojuelegba area of Lagos and launched a cleanup exercise of the area to mark the 2019 conference of the Nigerian Army Ordinance Corps (NAOC).

The no fewer than 300 officers and men of the Corp, led by the Commander Maj-Gen Omotomilola Akintade, cleaned up gutters, drainages and swept the street of Ojuelegba and adjourning areas as part of its Corporate Social Responsibility (CSR).

The soldiers opened up blocked drainages and got out heaps of used cellophane bags and other waste materials from gutters to ensure easy water flow and a clean environment.

General Akintade, who was represented by Brigadier General Toyin Jinadu, described the exercise as part of the activities lined up to commemorate the 2019 Corps Commander Ordinance Annual Conference.

He expressed hope that the exercise would further boost the relationship between them and the civilian populace, considering that the relation between the force in Ojuelegba and the public had been frosty in the past.

“This exercise is part of our corporate social responsibility to help clean the environment and make it better,” he said.

“We have no fewer than 300 personnel, both officers and men, for this exercise and we will ensure that we clean up the nooks and crannies of Ojuelegba.

“The clean-up will not stop at Ojuelegba. It will extend to other areas of Surulere Local Government Area as a whole,” Akintade said.

He advised residents to maintain a clean environment and to support the waste management agencies to effectively keep Lagos metropolis clean.

Traders, food vendors and other residents, who came out for the exercise, expressed gratitude to the Army for its intervention.

Speaking to Sunday Sun, a food vendor who was identified as Mercy Owolabi, said it was surprising to see military personnel clean gutters and sweeping the street, saying “we were shocked at this and since they are doing it without asking us to pay or punishing us over it, then it’s a good development that needs to applauded.”

A bus driver, Ita Joshua, thanked the military for undertaking the clean-up effort, saying as it will go a long way towards improving the relationship between the Army and the people.