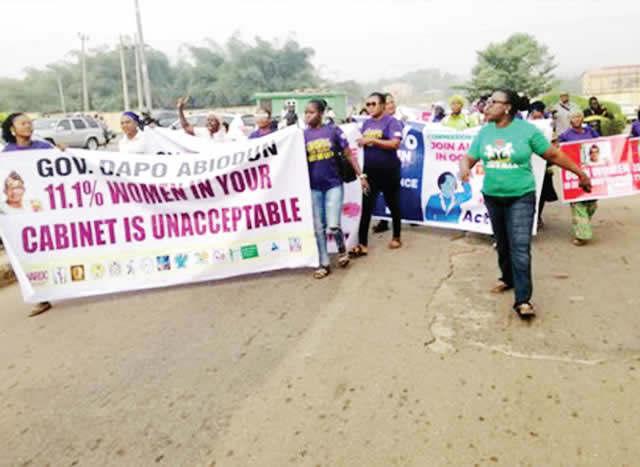 The women stormed the governor's office in protest

Hundreds of women  on Monday besieged the  Ogun State  Governor’s Office, Oke-Mosan, Abeokuta  with mats and stoves to protest the composition of the commissioners’ list released by Governor Dapo Abiodun.

The women’s protest came almost the same time when the commissioner-designates were being screened by the state House of Assembly few metres away on the same premises.

The governor had last week submitted the list of 18 nominees for the positions of commissioners to the assembly for approval.

The women, who were drawn from about 25 women groups in the state, laid siege to the entrance to the governor’s office, insisted they would not leave the entrance until their demands were met.

They refused to leave the entrance despite the presence of heavy security personnel while they demanded 35 per cent representation in the cabinet of Abiodun.

Speaking on behalf of the Coalition of Women in Ogun State, the convener, Dr Abiola Akiyode, said the women rejected the commissioner-nominees list submitted by the governor on the grounds that they were given only 11.5 per cent representation.

Akiyode argued that the governor had refused to fulfill his promise of 50 per cent women representation in his cabinet.

Akiyode said, “We are back here because we are concerned about the number of women the governor has appointed in his cabinet.

“Many of the governors in the past have appointed more than 35 per cent and it will be retrogression if this present administration is doing anything lesser.

“Gbenga Daniel had about 37 per cent women representation in his cabinet and Ibikunle Amosun appointed like 45 per cent of women.
“Women have held great positions and we have achieved a lot.

“We were shocked to see the list the governor sent to the House of Assembly and we think this is an affront looking at our contribution to his emergence.

“We want to stay here and we want the governor to come and give us the actual fact that our demands would be met.

“The governor cannot afford to leave or abandon us. We want at least 35 per cent women representation.”

While pacifying the angry women, the Deputy Governor, Noimot Salako-Oyedele, said the governor was gender sensitive and would ensure large appointment of women in his cabinet.

Salako-Oyedele assured the women that they were going to occupy best positions in Abiodun’s administration.

She urged them not to get derailed because there were many positions to be occupied by women.

She said, “The governor is a listening governor   and he is concerned   about what the people say.  The governor is an  all-inclusive politician that is ready to make sure Ogun State is stable.

“We need the best people for the job and women are going to have the best place in this government.  Majority of the appointment made so far are women because this government believe women are the  backbone of any economy and they cannot be neglected.”

Earlier, the women had gone to the state House of Assembly and had advised the lawmakers to reject the commissioner-nominees’ list sent by the governor.

The women in their large numbers had urged the lawmakers not to screen the nominees.

They stressed that the Assembly must ensure that their resolution of 35 per cent women representation was fulfilled by the governor.

In his reaction, the Speaker of the assembly, Olakunle Oluomo, said the house would look into the demands of the women and ensure that proper actions were taken.

The speaker, who was represented by one of the Assembly members, Victor Elemide, said the lawmakers would meet with the governor and deliberate on how more women could be added to the commissioner-nominees’ list and other appointments.