Why Rivers Billionaire, Chief Lulu-Briggs Is Yet To Be Buried, One Year After His Death


Even though he died several months ago, Rivers State-born billionaire, High Chief O.B Lulu-Briggs is yet to be buried. 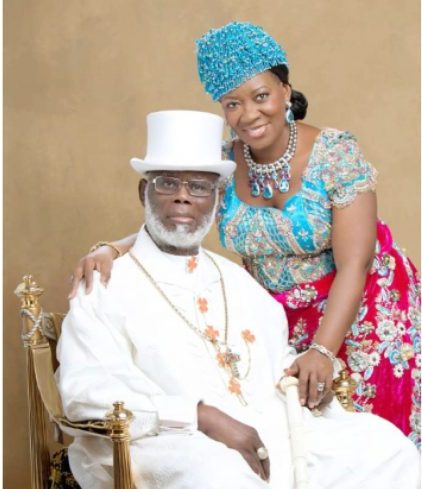 December 27, 2019 will make it one year a Rivers State-born billionaire, High Chief O.B Lulu-Briggs passed on in Accra, Ghana and his remains are yet to be brought back home and accorded a befitting burial according to Kalabari culture and tradition.

Lulu-Briggs, a philanthropist and founder of the Monu Polo Oil Prospecting Company passed on in December, 27, 2018 in Ghana. His remains have not been brought home for burial because members of his family are locked in a cold war over the circumstances surrounding his death. His second son, Chief Dumo Lulu-Briggs, invited the police to investigate the circumstances surrounding his father’s death.

It was gathered that the fight among the family members stalled the burial of the late billionaire scheduled early this year.

The widow of the deceased, Dr Seinye Lulu-Briggs, in a letter dated July, 2019 and addressed to the elders of the Briggs family, appealed to them to initiate the process of interment of her late husband.

In the letter, which was made available to our correspondent, Dr Briggs stated, “As the widow of Opuda Lulu-Briggs and the mother of Briggs family at large, I plead with you all to give consideration to the fact that Opuda had passed on to glory since December 27, 2018.

“This is seven months and he has not been buried. The reason this is justified or not is not for me to state here. What I pray is that God almighty may grant you grace to exhibit his counsel in your deliberation as it affects me and all my children.’’

She urged the family to restart the process of according the deceased a befitting burial.

Trouble started when the kinsmen of the deceased, under the aegis of Oruwari Briggs-Canoe House Abonnema, in an advertorial placed in May, 2019, raised the alarm over the whereabouts of the High Chief, who also doubled as the head of Oruwari Briggs.

In the advertorial, signed by High Chief A.B Ajumogobia, Chief Ibim Masi Briggs, Chief Solomon W.Y Briggs and four others, Lulu-Briggs kinsmen said they didn’t know the whereabouts of their son, who was allegedly announced dead by the family on December 27, 2018 while he was travelling to Ghana.

They stated that they did not know whether he was dead or alive, adding that since he travelled to Ghana, they had not seen him in whatever state. They said that if he was dead they should see his corpse and the mortuary receipts where it was kept, or his death certificate.

The second son of the deceased, Dumo Lulu-Briggs and his stepmother are in a cold war over who would take custody of the corpse. While Dumo accused his stepmother of delaying the burial, the latter alleged that the issues concerning the deceased’s properties were the major bone of contention.

Many prominent Nigerians, including former presidents, Olusegun Obasanjo and Dr Goodluck Jonathan, had tried to resolve the matter, but the contending parties appear not to come to terms.

In the midst of the protracted family crisis that has delayed the burial of the Kalabari High Chief, the Rivers State Government has offered to bury the octogenarian.

Making the offer during a meeting with the people of Kalabari ethnic nationality on Wednesday at the Government House, Port Harcourt, Governor Nyesom Wike said the Rivers State Government was interested in according the late philanthropist the respect he deserves.

He said, “I even told them to let the Rivers State Government be responsible for the burial. All I want is peace.’’

He berated those he accused of allowing monetary consideration to influence their direction of thought on the late billionaire and philanthropist.

“How can such a man not be buried for one year? Not that they are looking for money to bury him,’’ the governor said.

He called on Kalabari leaders to set their differences aside and ensure that Chief Lulu-Briggs is buried.

He said, “How can a prominent son of Kalabari stay in the mortuary for one year and we are all here? Nobody can speak the truth. They have divided themselves.  You collect money here and there and you cannot speak the truth.

“I have intervened more than three times but was disappointed by the wife. I have to say clearly to all of you that I have never received an insult like that in my life.’’

He said the feuding parties should allow the High Chief to be buried, after which they could continue the struggle for his properties.

“Let the man be buried and anyone who is dragging properties can go ahead. How can such a man not be buried for one year? He queried.

Governor Wike appealed to the Amanyanabo of Abonnema,  King Disrael Bob-Manuel and other leaders of the area to directly intervene to resolve the matter.

Also, a group of legal professionals and beneficiaries of the benevolence of the late High Chief O. B. Lulu-Briggs has called on his family to bury their grand patron.

During the visit, the leader of the group, Mr. Jonas Iniayemana said, “As children of Opuda, who, through the O. B. Lulu-Briggs F o u n d a t i o n, received his unquantifiable milk of human kindness and generosity in greatly assisting us and so many others towards the attainment of our career aspirations despite not even knowing most of us nor having blood or ethnic affiliations with most of us, we are deeply saddened and find most worrisome, uncharitable and unacceptable, the undue delay in laying the remains of our father and grand benefactor to rest in mother earth. It is unbelievable that anybody can deprive rest to a man who dried the tears of countless people.’’ He appealed that the late High Chief Lulu-Briggs be buried within four weeks.