In a statement issued by the governor through his Chief Press Secretary, CPS, Segun Ajiboye, he described the incident as a sad commentary. 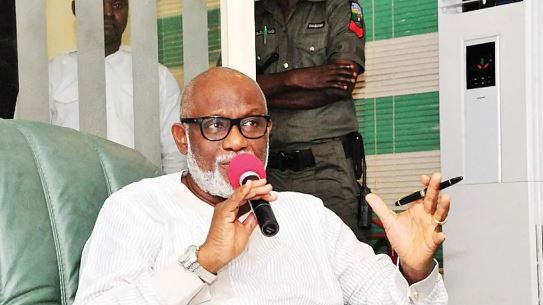 The Governor of Ondo State, Oluwarotimi Akeredolu has called for calm among residents of the state over the issue of the missing one-year-old boy, Gold Kolawole from Sotitobire Miracle Centre, which led to the razing of the church.

Akeredolu, who is speaking on the issue for the first time, called for thorough investigation into the development, as he stressed that he has been receiving daily security reports from security agencies as regards the development.

Recall that pandemonium broke out in Akure, the Ondo State Capital on Wednesday when rumour filtered into town that the corpse of the missing child was dug out from the church’s altar.

With the information spreading like a wildfire, youths from various parts of the town had mobilized to the venue of the church where they set it ablaze and vehicles belonging to the church and the police. The raging youths also attacked and destroyed the personal house of the founder of the church, Prophet Babatunde Alfa.

The incident led to the death of two people, including a policeman.

In a statement issued by the governor through his Chief Press Secretary, CPS, Segun Ajiboye, he described the incident as a sad commentary.

“The Ondo State Governor, Arakunrin Oluwarotimi Akeredolu, SAN finds it imperative to appeal for calm on the unfortunate loss of a one-year-old child and the attendant crisis which occurred yesterday, Wednesday, December 18, 2019.

“Mr. Governor observed and personally noted the concern of the general public since the incident last month. This is even as pressures sufficed for Government to publicly make statements in respect of the missing child.

“The loss of the child in a Church, no doubt, remains heart-aching and represents a sad commentary. However, it is pertinent to state that the enormity of the incident could not have permitted a hasty rush to make public statements, especially when investigations had already commenced and daily briefs by the Commissioner of Police were received by the Governor.

“It is perhaps, instructive to disclose that Mr. Governor was being briefed in respect of the incident by other relevant security agencies, including the DSS until the unfortunate action of yesterday which culminated in needless deaths and destruction of property.

“Mr. Governor wishes to state that an incident as troubling as the loss of a child requires a thorough investigation with the cooperation of all and sundry. It touches all, including Government.

*Therefore, it will be preposterous for people to take laws into their hands and jeopardize a deep probe that could unravel the mystery.

“Governor Akeredolu enjoins the general public, especially those directly or indirectly affected, to be calm and cooperate with security agencies as they have heightened efforts to get to the root of the matter,” the statement read.