A lascivious Okada rider has been arrested by the Police for raping a woman and killing her son. 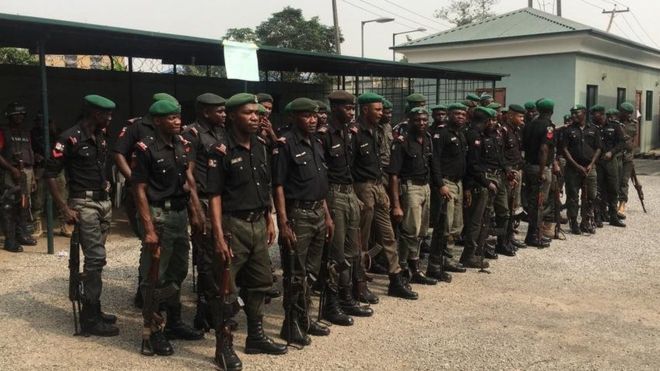 A randy commercial motorcyclist, Gbenga Oduola, 37, has been arrested by men of Oyo State Police Command for beheading a five-year-old boy, Opeyemi Fadeyi, and raping his mother, Bosede Jimoh, 34, serially.

The incident occurred on December 9, 2019 at a house at Imeleke Road, Lawal Estate Area of Igboora, the headquarters of Ibarapa Central Local Government Area of Oyo State.

Oduola was among the 19 suspects paraded by the Commissioner of Police in the state, Mr. Shina Olukolu, at Eleyele in Ibadan, on Friday. They were arrested for offences ranging from impersonation, armed robbery,  kidnapping, and unlawful possession of ammunition.

According Olukolu, the suspect carried Bosede and her son on December 8, this year, from Oja-Oba in Igboora and forcefully had carnal knowledge of her three times before day break.

“The following day, December 9, 2019, the said commercial motorcycle rider took the victim’s son to another room and beheaded him with a cutlass. He claimed to have dumped the remains in a nearby bush beside his house.

“The remaining body part was later recovered at the backyard of Oduola Gbenga’s house and deposited at the General Hospital mortuary for autopsy,” Olukolu.

Oduola, in an interview with journalists, did not deny killing the boy, saying: “I carried her and her son on my bike in Igboora. Immediately I saw them, I knew they were visitors to Igboora. They asked me to take them to their house and instead I took them to my house.

“While on the bike, I told the woman that I liked her and I wanted her to be my wife. She agreed. So, I took her to my house. So, I had sex with her. It is true that I killed her son on the second day.

Fielding questions from reporters on why he killed the innocent boy, he responded: “I just killed him because I did not want any disturbance between his mother and myself. I buried his head in my shop and I put his body in a black nylon and threw it into the bush. I am a bicycle repairer and an okada man.

“I killed him so that everything will get better for me. I did not know that she would expose me. I have not killed anybody before. The boy did not offend me. It just happened like that. I did not have a wife at home. I had two wives before but both of them left me. So, I wanted to take his mother as my wife.”

Olukolu also paraded three persons for impersonating officials of the Economic and Financial Crimes Commission (EFCC). The suspects were said to have gone to the house of one Ijadunola Olajide at Elebu area of Ibadan on December 2, 2019 under the guise of being EFCC operatives with fake EFCC identity cards and purported search warrant.

One of the suspects, Lekan Alausa, who claimed to be a university graduate, said the gang presumed that Olajide was an internet fraudster and they went to his house for them to also get their own share of the money he probably made through cybercrime. But Olajide raised the alarm, which led to their arrest.

Drama As 27 Children Are Found In 2 Illegal Orphanage Homes...Proprietor Arrested

Commotion As Another Fuel Tanker Catches Fire In Onitsha