The story has been told of a married woman who was brutally killed for rituals by a native doctor and her ex-lover.

Wajub Akanbi with the children. Inset: the deceased

The grief was penetrating and infectious. The eerie silence that befell the environment was so loud and visible you could almost touch it. Everywhere reeked of sorrow.

Wajub Akanbi, the widower of the 32- year-old housewife, Abosede,  allegedly hacked down last month for rituals by a native doctor and her ex- lover, Segun Olaniyi, in connivance with 12 others, exemplified the tragic atmosphere. Eyes blood shot and fighting hard not to break down in tears, he intermittently shook his head in grief and muffled some incoherent words. He was a personification of pity.

We had reported last Saturday how Abosede was allegedly killed for rituals after she visited the 42-year-old Olaniyi on November 3.  Olaniyi and other suspects were picked up by the police at Itori, Ifo, Papalanto and Adigbe areas of Ogun State.

They were arrested by operatives in the Ogun State annex of the IGP Intelligence Response Team (IRT) following a petition by Abosede’s father, Mr Segun Adeyemi, claiming that his daughter mysteriously disappeared on her way back from office on November 3, 2019.

The petition was addressed to the Inspector General of Police through the Commander of the IGP Intelligence Response Team, Abba Kyari, a Deputy Commissioner of Police.

Parts of Abosede’s dismembered body were recovered in a forest at Adumbi village in Itori area of Ewekoro Local Government, Ogun State.

When Akanbi, 36, eventually found his voice, he opened up on his ordeal while the nightmare lasted. One of our reporters met him at his sparsely furnished residence in the Giwa Oke Aro, Ifo Local Government Area, Ogun State. He said the burden of caring for the four children had become unbearable for him since Abosede was murdered.

He demanded justice, saying: ”My wife (Abosede) was 32 years old. She told me she wanted visit her mother. I never knew she would be visiting the said ritualist who connived with others to terminate her life cruelly. Look at my children. They will not see their mother again. I want justice.” 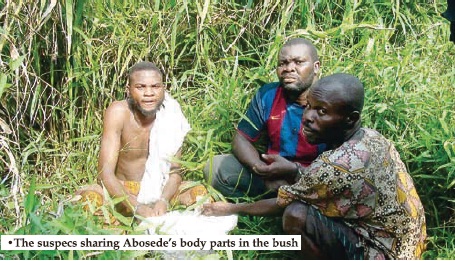 He explained that the stress he goes through to take care of his children has begun to take toll on him, even as he struggles to earn a living as an okada operator.

“I was thinking that she would appear to me; I would be awake all through the night thinking that she would return home, not knowing that she had been killed for rituals. I didn’t see my wife’s body because she was mutilated and dismembered. The sleeplessness I suffered was so much that I wouldn’t be able to sleep until 4 am, everyday, hoping to see my wife again. By 4.30 am, I would have to wake up to prepare our four children for school.

”When she disappeared without a trace, I informed her father and he told me that she would be found within five days. Somehow, it was just two days after I spoke with his father that the police confirmed that she had been killed and that some of her killers had been apprehended.

”The commander of Inspector General of Police Intelligence Response Team(IRT), in Ogun State and his boss, Abba Kyari, a Deputy Commissioner of Police(DCP), invited me to the Sango-Ota Police Station, Ogun State, where the suspects were detained.

”I went to the station with my children. I was made to confront the suspects. They shook their heads in pity when they saw me and my little children. At a point, guilt so overwhelmed them that  they could no longer bear to look at me. It was a very sad but dramatic moment. They lowered their heads and looked away, guilt written all over them.  But one of the policemen forced them to look at me and my children to see the havoc they had done to us by killing my wife.”

Akanbi, a commercial motorcyclist,  appealed to the public for financial help to take care of his children. He said: “Her death has turned me into an overnight widower with four children to cater for. I am an ordinary okada man with a meager income; hence, I am calling for financial support from kind-hearted Nigerians.

Abosede’s mother, Mrs Alice Adeyemi, who fought tears while bemoaning the cruel murder of her daughter, said: “She told me she was going to work. I did not know that she had fallen into the hands of ritualists. I called my daughter the third day and she did not pick my calls. I became worried. Her husband(Akanbi), my husband Adeyemi(Abosede’s father) and I started looking for her.  We couldn’t find her until IRT operatives intervened and the killers of my daughter were arrested.”