The story has been told of a newly-wedded bride who perished in a horrific car accident along with 21 others. 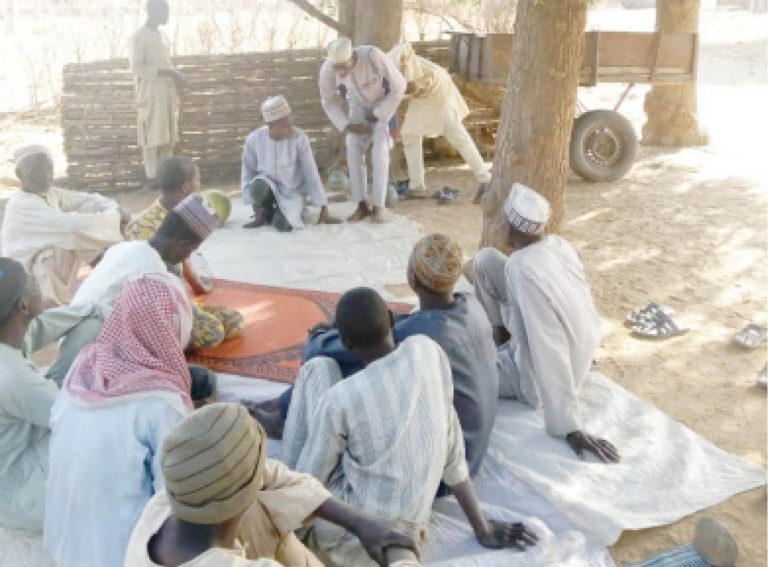 Symphatisers at the home of one of deceased at Karofi town

Alhaji Buwa was also billed to receive and convey home another bride, Nafisatu, from Yola, but this could not happen as they all died in a car crash.

The wedding party took off happily after the completion of marriage formalities at Karofi from the Dutsin-Ma Motor Park on Thursday last week in a chartered Hummer Toyota: destination, Yola.

The marriages were all slated as part of the Fulani annual “Gidan Dangi” rites; where they used to visit other Fulani settlements, especially in their ancestral Yola homes.

The 2019 trip, however, turned out to be a tragedy as the crash in Bauchi State claimed all the lives of the members of the bridal party.

What made the 2019 trip unique was the fact that two inter-marriages were contracted between the Fulani in Dutsin-Ma and those in Yola to further cement their relationship.

DSP Kamal said the accident was a head-on collision as a result of which all the 26 passengers in the two vehicles sustained serious burn injuries.

He said the victims were evacuated from the scene by security agents with assistance from Good Samaritans to the Abubakar Tafawa Balewa University Teaching Hospital (ATBUH).

“Unfortunately, on reaching the hospital, 25 of the passengers were confirmed dead by a medical doctor while one  survived and is on admission,” he said

What made this deaths so painful is the fact that all the 22 people that took part and later died in the trip were related, having hailed from various Fulani settlements of Katanga, Karofi, Radda, Safana, Faguwa, Jangauta, Doganzoo and Wakaza villages in Dutsin-Ma and  Safana local government areas of Katsina State.

Fatima, a wife left behind by late Buwa, said her late husband had looked forward to the event and that when the day finally came he had bid them farewell alongside her co-wife and children only for them to later hear of his death in the car accident.

For one of his surviving sons, Sanusi Abdullahi, the death came at a trying time for the family because his father was going to Yola to condole their uncle over the death of his daughter.

Asibi, mother of the deceased bride, Daharatu, said, “She was such a good girl and ready for the marriage; it’s an act of God and we have left everything to him.”

Abdulkadir Habib who lost an uncle, Abdu Adamu, said it was a terrifying moment for the family to lose such an elder who guided its affairs.

This accident has sent the Fulani communities around the scene, in Dutsin-Ma and some parts of Adamawa into mourning.

Already, men of the FRSC, led by the Bauchi State Sector Commander, Sule Tanimu, have visited Dutsin-Ma to commensurate with the families of the dead.

Speaking on the accident, the District Head of Dutsin-Ma and Yandakan Katsina, Sada Muhammad, said it was with great shock the district received the incident, but that it was from Allah and “we have to accept it in good faith and pray for the repose of their souls.”