Two notorious robbers have been apprehended by men of the Nigerian police in Lagos state. 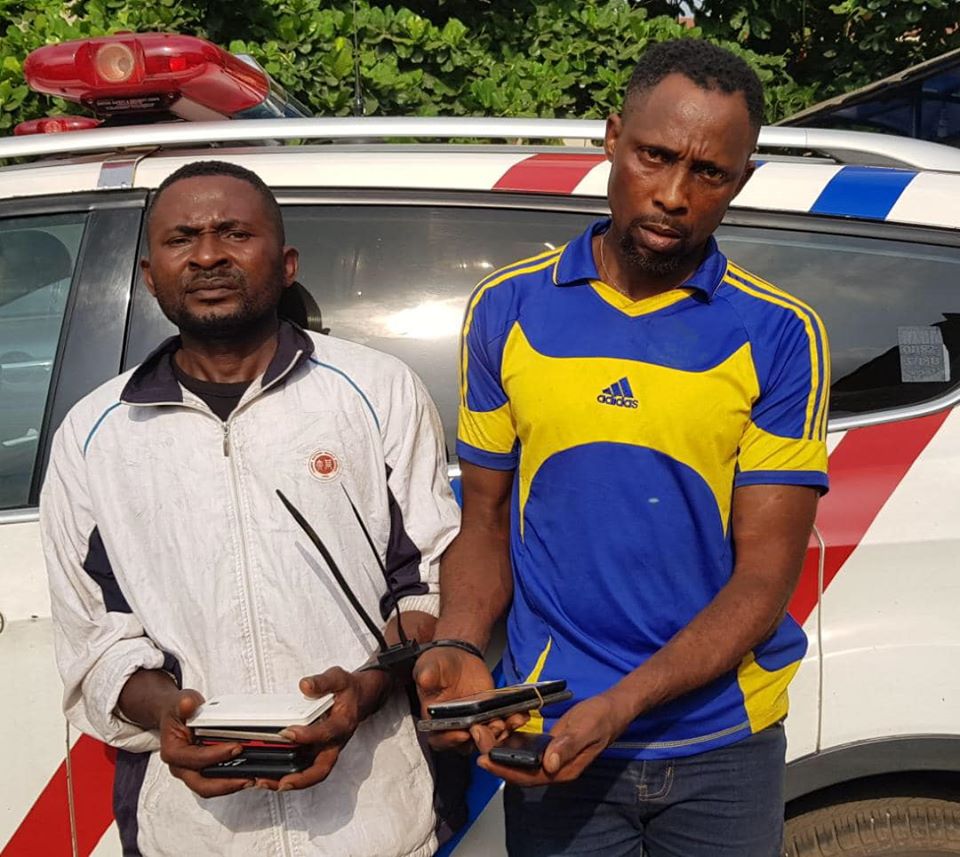 Armed robbers caught in Lagos
Two inter - state robbers who have been breaking into homes and boutiques in Lagos and Ogun State and dispossesing residents of their belongings were on Wednesday arrested by the operatives of the Rapid Response Squad in Oshodi after another successful outing.
The robbers, Gbemi Ogunleye, 45, a fairly used cloth seller in Ijora and Ini Effiong, 32, a road side Gala hawker in Oshodi were arrested in early Wednesday morning after an all night robbery at the resident of one church cleric in Ibafo, Ogun State.
The suspects, in their confessions stated that they break into homes and boutiques in Ibafo at midnight, cart away clothes, mobile phones and electronics.
They added that during the day, they sell the electronic and phones as well as clothes before returning to their respective businesses in Ijora and Oshodi, Lagos.
Ogunleye stated that apart from the fairly used clothes popularly known as ‘okrika’, which he sells in Ijora, he also sells clothes and shoes taken from their victims at night. He maintained that they target boutiques and surveyed the environment days before breaking into them at night.
Effiong in his confession to the police disclosed that although he hawks snacks in traffic, he teamed up with Ogunleye to rob at night.
He explained that he also robs in traffic at night, adding that he has snatched many mobile phones in traffic in Oshodi Oke, Bolade and PWD while hawking snacks.
The two suspects who couldn’t give the specific figure of houses and boutiques they have broken into confessed that their operations have been more restricted to Ibafo and Mowe because they feared they would be arrested if they attempted to rob in Lagos.
Ogunleye noted that he met Effiong in February 2019 in Oke - Koto, Agege. He stated that their discussions on how to survive the nation's economic realities made them team up.
He further maintained that before he met his colleague, he had been operating alone limiting himself to Ibafo and Mowe. “I dont rob or burgle houses and boutiques everyday. Whenever I have money, I buy ‘okrika’ in Kotangoa market and sell them in Ijora, Lagos”.
The suspects disclosed that whenever they want to rob, they would converge in Kara, Ogun State before proceeding to Ibafo around 11:00 p.m to hang around the area before striking their target at about 1:00 a.m.
On their last operation in Ibafo, he said, “we hid in the bush till 2:00 a.m before we could gain entrance in to the house. We used cross bar to shift the burglar - proof from where we entered. We were with the occupants of the house till 5:00 a.m.
We collected 5 mobile phones, N4, 000 and a motorcycle. We were in Oshodi when RRS bike riders intercepted and arrested us in the morning”.
Already, about three of their victims have identified the suspects at RRS headquarters. One of them, a teenager revealed that the suspects spent more than 5 hours with her and her younger sister while their parents were away.
She added that they parked all her mother's jewellery, clothes and two flat screens before escaping.
Also arrested with the suspects was one Chinedu Onyema, their receiver. He came to Oshodi with N30,000 trying to bribe the police to release the suspects.
Recovered from the suspects were seven mobile phones, N4000 and a motor cycle with the registration number GGE 962 QN
Onyema has confessed being their receiver and that he bought mobile phones and electronics from the suspects.
Commenting on the development, the Commissioner of Police Hakeem Odumosu stated that there would be no hiding place for criminals in the metropolis. 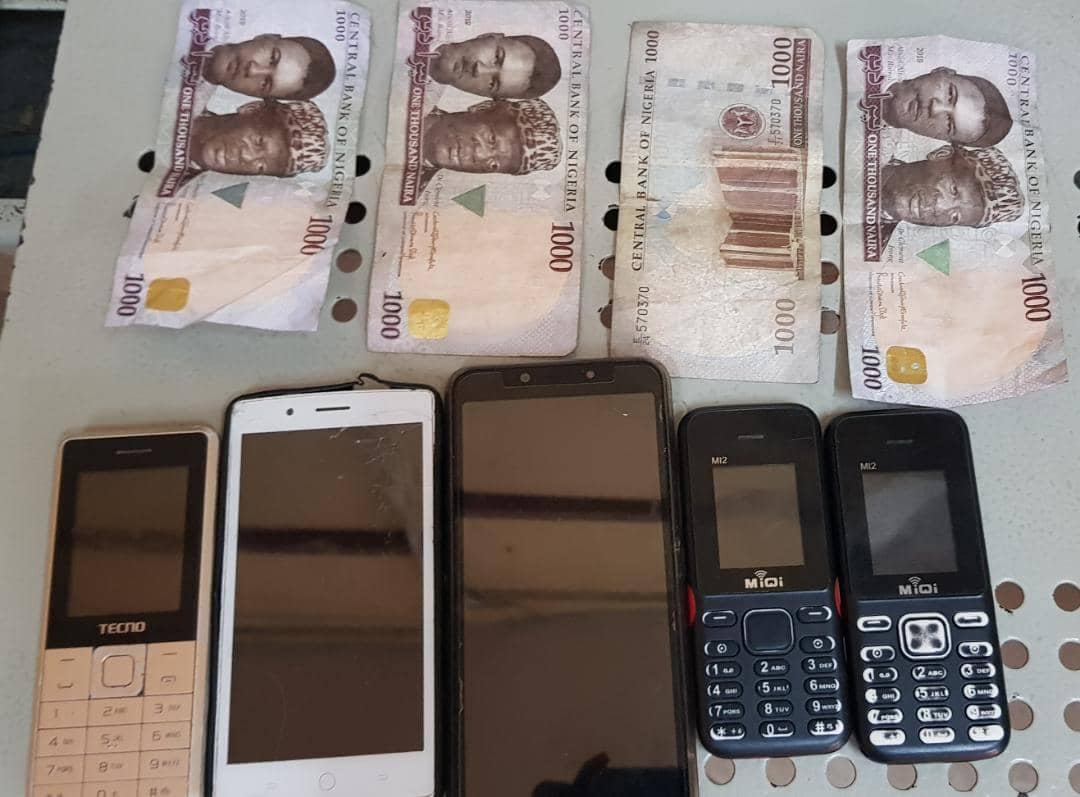 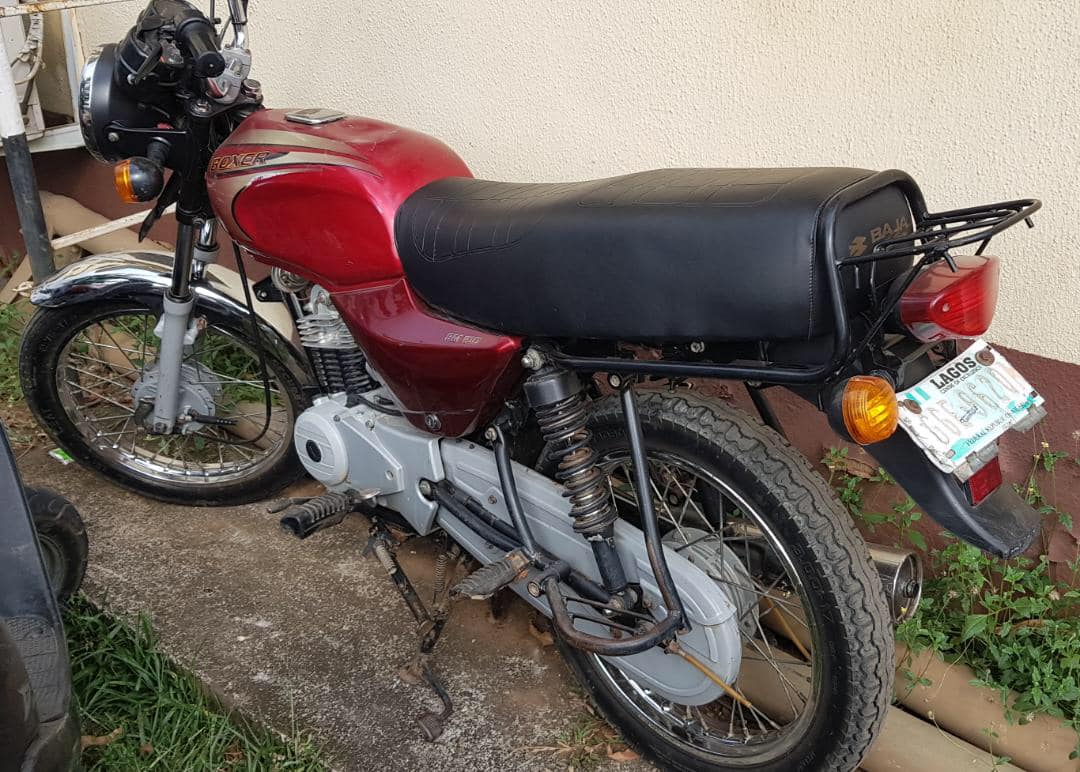 Boko Haram: Amnesty International Reacts To Execution Of CAN Chairman