A man has physically assaulted a woman after she refused his love proposal in Lagos. 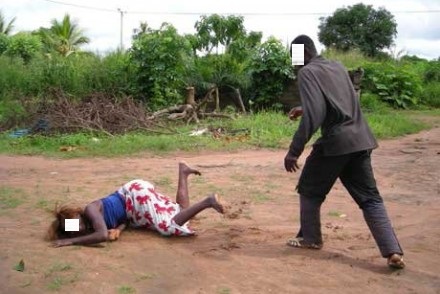 Couple fighting (File photo)
A 27-year old man, Adedolapo Omotayo, was humiliated and he reportedly lost control and beat up a lady, Abigail Ojo, who disgraced him publicly by refusing his love passes and mocked him.
According to PM Express, the incident happened at Abiola Adeyemi Street, Nicholas Bus Stop off Governor’s Road, Ikotun area of Lagos, where they reside.
The man, Omotayo, has been arrested and charged before the Court for assault by beating Abigail and inflicting injury on her fingers during the squabble.
It was gathered that Omotayo had engaged Abigail with the hope he would woo her easily before he received the shock of his life in the process. The victim reportedly insulted, mocked him publicly and he then gave her serious beating injuring her in the process.
The matter was reported to the Police at Ikotun Division and the man was arrested and detained at the station for interrogation.
During interrogation, Omotayo told the Police how Abigail had insulted and disgraced him in public but did not tell the Police what he told her that caused the insult.
The Police found Omotayo culpable and charged him before the Ejigbo Magistrates Court for the alleged offence.
He pleaded not guilty.
The prosecutor, Mr. Simon Njue, then asked the Court to fix a date for hearing to enable the Police to prove that he actually committed the offence.
The Presiding Magistrate, Mrs. A.S. Okubule, granted Omotayo bail in the sum of N50,000 with one surety in like sum. He was remanded in prison custody pending when he will perfect his bail conditions.
The matter was adjourned till 20th January, 2019.
Top Stories