A man has been apprehended by security operatives in Lagos after he attempted to sneak into a moving plane. 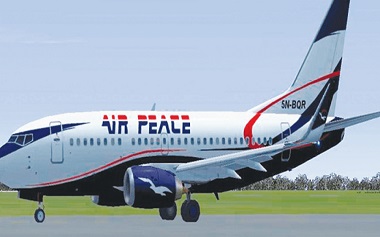 Air Peace
A man in his 20s who was  attempting to sneak into an Air Peace aircraft which was about to take off has been arrested by security operatives at the Murtala Muhammed Airport (MMA), Lagos on Friday.
The man who sneaked into the airport through the surronding bushes was immediately reported to Aviation Security (AVSEC) personnel of the Federal Airports Authority of Nigeria (FAAN).
He was arrested before he could enter the wheel-well of the aircraft that was departing for Owerri.
Mr. Stanley Olisa, the spokesman for the Air Peace in a statement said the incident occurred at 9:15 am when the aircraft was taxing towards the threshold for take-off
Olisa said the suspect  came out from the bush along the runway and attempted to gain entrance into the flight P47252, but the pilot of a private jet, which queued behind the Air Peace aircraft notified the pilot.
The statement added: ”There was a private jet behind the aircraft. The pilot in command of the private jet informed the Air Peace pilot in command that a young man obviously in his twenties, was trying to force his way into the aircraft.
”The security wing of the Federal Airport Authority of Nigeria, FAAN, was alerted and the man was accosted and whisked away.”
On interrogation, the man confessed that he thought the aircraft was bound for overseas.
The airline commended FAAN for its timely intervention, stressing that the regulator, the Nigerian Civil Aviation Authority (NCAA) had commenced an investigation into the incident.
Air Peace also reiterated its commitment to the safety of its customers and assured that it would continue to demonstrate this commitment in all aspects of its operations.
Top Stories