It was gathered that Joy vowed that she would not be alive and watch another girl take her man. 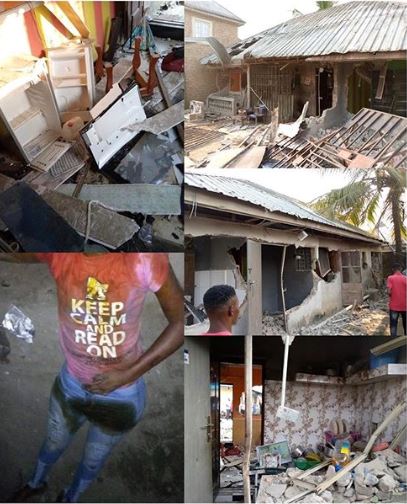 The lady's corpse and the destroyed house of boyfriend

There was chaos in Agbura, Yenagoa, Bayelsa State, on Boxing Day, as a lady, identified as Joy Osain, decided to take her own life after her boyfriend, Eze Augustus, broke up with her.

According to reports, trouble started on Christmas Day when Eze avoided her. She later went to his house on Boxing Day and allegedly found another lady there. The matter degenerated into a fight.

It was gathered that Joy vowed that she would not be alive and watch another girl take her man. She later went ahead with her vow by drinking a poisonous substance which led to her death.

Angered by the development, her family members stormed Eze’s house and destroyed it. The corpse of the deceased has been recovered by the police and deposited at the Federal Medical Centre Yenagoa for autopsy, while the boyfriend has been detained for interrogation.