At least one armed robber has met his waterloo and four others arrested after they tried to rob a bank in Abuja. 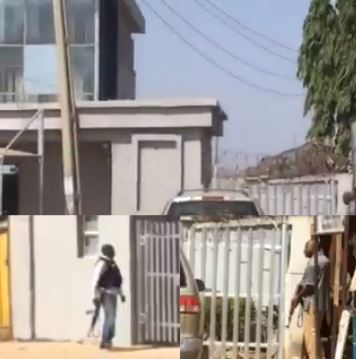 Scene of robbery incident in Abuja
Policemen in Abuja have killed an armed robber and arrested four others after foiling a bank robbery in Mpape, a few metres from Maitama, Abuja.
According to a report by Punch, the police gunned down a suspect and arrested four others inside a branch of First Bank Plc a few minutes ago.
The robbers were trapped in the banking hall for many hours following the arrival of the police who surrounded the building.
Eyenwitnesses said when the robbers refused to surrender or come out of the bank, the police operatives stormed the hall, killing one of the gang members in the process.
The FCT Commissioner of Police, Bala Ciroma, confirmed the incident.
He stated, “It is a foiled bank robbery; We stopped the robbers from raiding the bank. Four men were arrested while a suspect was killed.
“Investigation has commenced to determine how they entered the bank and other things.”
A huge crowd thronged the scene as the news of the robbery spread, causing serious traffic gridlock on the narrow road that leads into the community which is located on a hill.
Details later…
Top Stories