Tragedy struck in Kaduna state earlier today, as an eight months pregnant woman was killed by a snake inside her toilet. 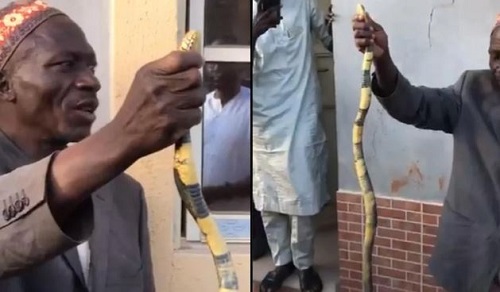 An 8-months pregnant woman has died after she was bitten by snake when she went to the toilet.

According to social media user, Noorayne has called for awareness of hospitals on snake bites and the importance of antivenom in hospitals after an 8-months pregnant woman died from snake bite, leaving her 2 years old son behind.

Sadly our hospitals couldn’t be of help

As some of the hospitals claim that they don’t keep antivenum cuz they hardly use it and it expires, can u inagine the stupidity?

As big as 44 hospital in Kaduna, they said, they had nothing to give her when she was rushed there…

The express road in Kaduna that leads to NNPC clinic at Sabo, is in poor condition that lead to the delay and waste of time before they get there…

Our leaders only loot money for their personal needs. But the masses mean nothing to them…

Lastly, if my boice could be heard, I’d wish we get more awareness on the dangers surrounding us and the right first aid in any situation Also, awareness as how to differentiate snake bite from scorpion and other animals bite

Cuz when she snake bit her, she didn’t know it was snake, so she proceeded, performed ablhtion, prayed subhi, on saying her adhkar, the place started to swell up and she started having some strange pain,that was when she called her husband(my brother) who left her just last night

She was then rushed to different hospitals which were all guving helpless excuses By the time they got to nnpc clinic, she could barely breathe and she was telling her husband over the phone “I can’t see and I can’t hear, La ilaga illallah Muhammadur rasulullah…”

And from then she was quiet he kept saying “Hello! Hello!” But no response at that point he knew it was too late

She left behind a 2 year old boy, Muhammad whom she celebrated his birthday togerher with the dad just two days ago💔

May Allah forgive her shortcomings and may He protect us, ameen.

Below is the video of the snake caught inside the WC

Please be careful ehen making use of your toilets pic.twitter.com/s8Ui1e6eMv