The people of Ebonyi state have been left in a state of confusion after their governor, a PDP member claimed he has joined the opposition party. 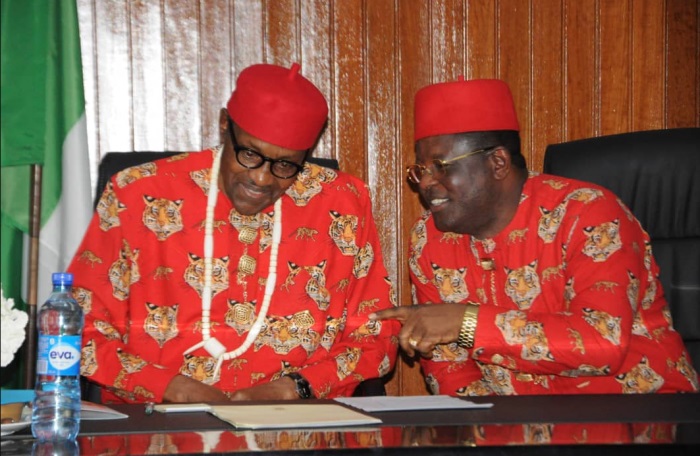 President Muhammadu Buhari and David Umahi
Ebonyi State Governor David Umahi has confused his people by claiming to be a member of the All Progressives Congress, while advising them to stay in his Peoples Democratic Party.
The confusion came while Umahi was speaking with people from Ishielu and Onicha LGAs that he is “100 per cent APC.”
He then went further to enjoin people to stop ”jumping from here and there” because they might be caught in anti-party activity web.
“Stay in one place. Don’t run from here to there and from there to here. E no make sense. If you say you dey there (APC), know I am already there. If you go to APC, I am an APC member. If you go to PDP, I am there.
“I am the only person that does anti-party and nothing will happen. Any other person that does anti-party is gone. So, I am representing you in APC while you all stay in PDP. If you like, go and write it on social media”, Umahi said, according to a report by The Nation.
The governor’s younger brother and PDP National Vice-Chairman (South-East), Austin Umahi, joined members of the delegation in clapping and laughing at the event which held in Uburu, Ohaozara Local Government Area.
The governor buttressed his claim to being an APC member by saying that he sent handsome Yuletide gifts to the ruling party’s leaders.
The governor thanked the Muhammadu Buhari administration for making Ebonyi the only state in the Southeast to be listed among the states to have a new Federal College of Education.
He told the people of Ishielu local government that the college would not be located in their zone. He, however, promised them a technical school.
Top Stories