Commotion As Boeing Plane Skids Off Runway While Landing In Airport


A Boeing plane has skidded off the runway while landing at an airport, causing some stir in the area. 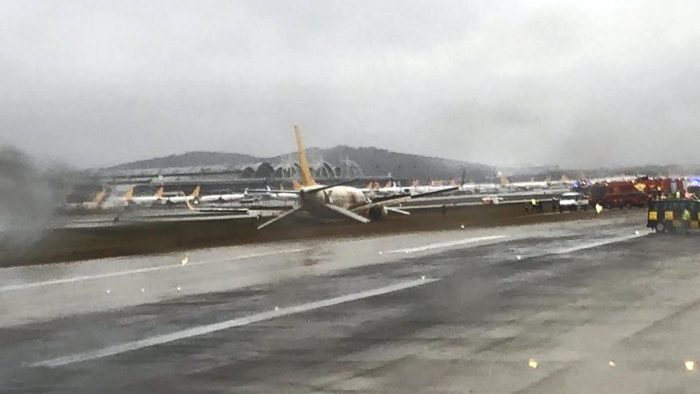 The Boeing plane with emergency vehicles at the Istanbul airport

A Boeing 737-800 plane arriving Istanbul from Sharjah in the UAE, skidded off the runway on Tuesday, causing suspension of flights at the Sabiha Gökçen International Airport, Istanbul’s second airport.

The plane is operated by low-cost Pegasus Airline, reports The National, a UAE newspaper.

Images from the scene saw emergency vehicles surrounding the plane, which was apparently stranded on the grass next to the runways.

All departures from the airport have been suspended, while the incident is dealt with.

Istanbul governor’s office said there were no deaths or injuries and all 164 passengers were safely evacuated, according to DHA.

Several planned departures have been cancelled and arrivals have been diverted to other airports.

The PC747 flight departed Sharjah at 5.15am and arrived in Istanbul on time. Storms and heavy rain have affected the city and transportation since Sunday night.

The official Anadolu news agency said the international airport will be closed until 12:20.

It is the latest incident of a flight coming off a runway to affect Pegasus Airlines, the low cost airline, in Turkey.

In 2018, a Boeing 737-800 skidded off the runway at Trabzon on the Black Sea coast and plunged down the side of a cliff overlooking the sea. The 168 passengers and crew were evacuated safely.