CAC Church, Other Residential Buildings Gutted By Fire In Osun


There was a fire explosion which razed down buildings including a popular church destroying properties worth millions. 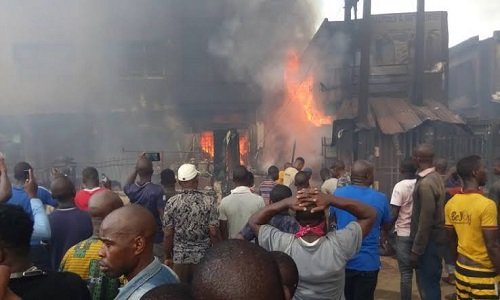 Picture of the fire

Some parts of Christ Apostolic Church district headquarters, Dada Estate in Osogbo, the Osun State capital, have been gutted by fire.

Properties worth millions were destroyed.

The cause of the fire, which lasted for an hour, is unknown.

It took the joint effort of police and fire service to put it out.

Another building in Ilesha, Osun State, was also razed on Sunday.

A witness said: “The fire incident affected the buildings of Vincent Orichi and Ogunsola Dayo on Sunday at Idasa Street, Ilesha.

“Some of the victims’ neighbours called them on the phone to inform them about the incident.

“The caused of the fire is unknown. Property worth millions was lost.”

The Commissioner of Police Johnson Kokumon advised the public to be careful.

“People need to be careful while cooking at home. They must ensure that all electronic appliances are put off and unplugged when they are going out,” he said.