Israel Will Not Join America In War Against Iran - Benjamin Netanyahu


Benjamin Netanyahu has banned top ministers from talking to the press about Soleimani's death and told them Israel should 'stay out of it'. 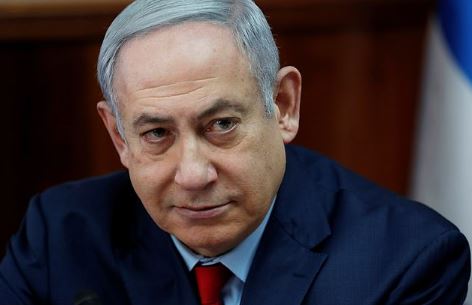 Benjamin Netanyahu has told his security cabinet that Israel should 'stay out of' any fallout sparked by the killing of Iranian commander Qassem Soleimani.

The Israeli Prime Minister told top ministers on Monday that since the general's assassination was carried out solely by the US, there is no reason to get involved.

Iran has promised a 'crushing revenge' following the strike which killed Soleimani and other top Revolutionary Guards commanders last week, expected to ramp up on Tuesday when a three-day period of mourning ends.

Top Iranian minister Mohsen Rezai, a former Guard commander, has threatened to reduce the Israeli cities of Tel Aviv and Haifa 'to dust' as part of the retaliation.

Netanyahu, who has cultivated a close relationship with Trump, initially threw his backing behind the strike, praising the US president for taking 'strong' action.

But he has since banned ministers from talking to the press about the strike for fear of creating the impression Israel was involved, two ministers present at Monday's meeting told Axios.

'The killing of Soleimani is a U.S. event, not an Israeli event, and we should stay out of it,' they reported Netanyahu as saying.

The director of Israel's security service Mossad told the same meeting that the risk of an Iranian strike on Israel is low because 'Israel stayed distant from the event'.

Iran has already said it will no longer abide by any of the terms of the 2015 nuclear deal signed under Obama in response to the attack.

The Iraqi parliament has also voted to expel all US troops from the country, which Iran said signals the beginning of the end of America's presence in the region.

While Iran has not made the rest of its plans clear, it is likely that US troops based in Iraq, the embassy in Baghdad, and troops in Syria will be targeted in response.

Hassan Nasrallah, the Lebanese secretary-general of Iran-backed Hezbollah, said all US bases, all warships and every single soldier in the region is now a target.

'The true, just retribution for those who conducted this assassination is an institution, which is the U.S. military,' he said during a ceremony to mourn Soleimani's death in Beirut on Sunday.