A soldier's wife's car has reportedly crushed a street sweeper in a community in Lagos state. 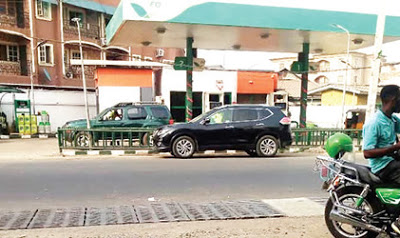 According to a report by Punch Metro, a street sweeper with the Lagos Waste Management Authority narrowly escaped death on Thursday after being crushed to a stationary petrol tanker by a motorist conveying a woman said to be the wife of a soldier.

The incident, which occurred around 8.30am on the Apapa Road in Ebute Meta, attracted sympathisers and men of the Federal Road Safety Corps to the scene.

According to the supervisor, who did not give her name, the victim, Tawa Ariyo, had just finished sweeping the road and sat in front of the Forte Oil filling station and was awaiting further instruction when the Toyota Matrix car rammed into her.

The woman being conveyed in the car turned to the driver and asked him to join the rescue team to take the victim, who was bleeding profusely in her mangled leg, to the nearest hospital.

The woman then brought out her phone and begged one of the attendants at the filling station to help call her husband.

A man, who identified himself simply as ‘Major’, answered from the other end and 10 minutes later, a corporal and two other soldiers showed up at the scene in two cars.

While one of the cars ferried the wife of the major away from the scene, the other headed for the hospital.

When our correspondent visited the Primary Health Centre in Oyingbo, the information officer confirmed that a 42-year-old woman was brought to the clinic, but she had been referred to the Lagos Island General Hospital.

“Her situation is a complex one that demands intensive care hence, the need to refer her to the hospital,” she said.

Ariyo, who was admitted to the Accident and Emergency Ward of the hospital, told PUNCH Metro, “I heard my colleagues saying the woman, whose vehicle hit me, was the wife of a military man. I cannot really say whether the driver was drunk or he simply lost control of the car. At first, I was so angry when they told me that the woman did not follow us to the hospital. I was alone with my supervisor and other LAWMA officials in the ambulance.

“The soldiers ordered the driver to take us to the Military Hospital in Yaba, but we refused because we use the Lagos Island General Hospital. Their last words before we departed were that the major would send someone to come and clear my hospital bill.”

However, our correspondent was accosted by two soldiers, led by one M. A. Mohammed, and they demanded to know his mission and made several attempts to bully him and compel him to delete the pictures and the interview he had with the victim.

When they realised that he was not willing to obey them, Mohammed ordered the corporal to grab our correspondent while he forcefully deleted all the pictures from the phone.