The wife of a Nigerian soldier who was killed by Boko Haram has revealed that his death was kept away from them for a while. 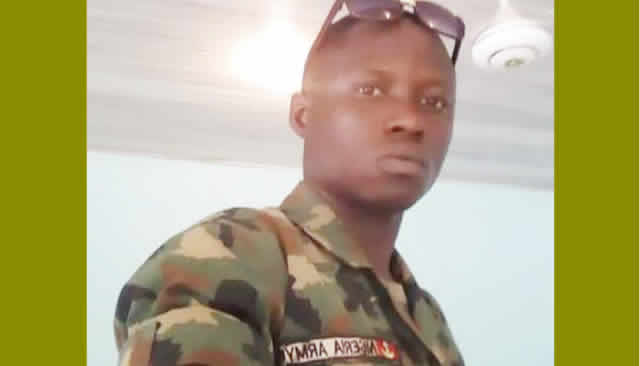 On the eve of the New Year when millions of people across the world prepared to usher in 2020 with renewed vigour, the atmosphere was solemn in the home of Abdulazeez Musa, an official of the Nigerian Army.

That day, the army broke the news of the killing of the 35-year-old soldier by Boko Haram terrorists in Borno State to the family.

It was learnt that Musa, with the service number 14NA/71/1222, was in Supply and Transport unit of the army.

Before they received the sad news, City Round learnt that the family had lost communication with him since December 2018, a development that threw his wife and four-year-old daughter into confusion.

The family’s apprehension was heightened by the attack on 157 Battalion in Metele in northern Borno on November 18, 2018 when scores of soldiers were killed by terrorists.

The army reportedly denied deaths of over 100 soldiers in the attack and only confirmed 23 casualties.

The Chief of Army Staff, Lt Gen Tukur Buratai, in a release signed by Brig Gen Sani Usman, also confirmed that 12 soldiers were killed at Kukawa, Ngoshe, Kareto and Gajiram, all in Borno State, when the troops came under Boko Haram attacks from November 2 to 17, 2018.

In the wake of the attacks, Musa’s wife, Sherifat, said she contacted him on the telephone to know if he was save but could not reach him.

The distraught widow told our correspondent on Tuesday that the family reached out to senior army officers who assured them Musa was in a good condition.

She stated, “I last talked to him in December 2018. We usually chatted on WhatsApp but since then, I was unable to reach him. We called some of his bosses that we know and they assured us that there was no problem. They said if there was any issue, they would have informed them from the headquarters in Abuja. They said they sent signals to Maiduguri but did not receive any information which means there was no problem.

“It was on December 31, 2019 that they contacted his brother, who is his next of kin, and told him he was dead. They said he was killed during an attack in November 2018.”

Our correspondent learnt that Musa, who hailed from Ilorin, Kwara State, joined the army in 2014, one year after he got married to Sherifat, who was pregnant as of the time he went for the training.

He returned from the training to meet his little daughter, but the nature of his job barely afforded him time to bond with the child, who is now four-year-old.

“He was serving in Benin, Edo State, before he was posted to Maiduguri in 2017. During the time, we didn’t hear from him, his daughter always asked after him. She was disturbed because he used to talk to her on the telephone. After a while, she stopped asking after him,” Sherifat disclosed mournfully. “His mother is still alive,” she added.

The bereaved woman turned down our correspondent’s request to speak with other family members of her late husband, saying they were mourning.

“There is no need talking to them. He is dead and nothing can bring him back,” she said.

When contacted on the telephone on Friday, the acting Director, Army Public Relations, Col. Sagir Musa, asked our correspondent to send a text message to him and promised to get back with comments. He had yet to reply to an enquiry on why the annoucncement of Musa’s death was delayed as of press time.