Some suspects have been arrested by the Police on allegations that they were caught stealing underwears. 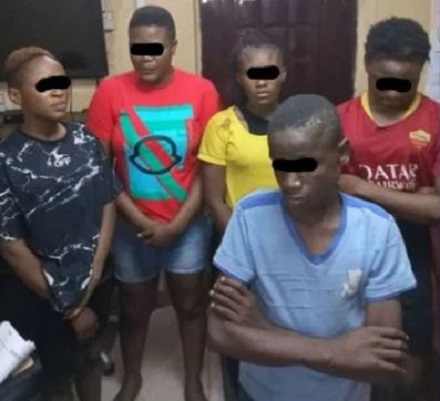 Five persons including a 15-year-old boy have been arrested in Ojo Area of Lagos for stealing female underwears.

A 15-year-old boy who was among the arrested suspects confessed to have been stealing female underwears in the area for about a year.

The teenager, Chukwajekwu Eziigbo, was arrested alongside three other teenagers and an adult he alleged he had been taking the stolen underwears to.

He was said to have been sighted by a resident who had gone out to urinate. The resident saw him collecting underwears on a cloth line in a building in Ojo area of the state.

The resident alerted his neighbours who subsequently arrested the teenager and handed him over to policemen.

During interrogation, the suspect said, “I have been stealing female pants for about a year now, from different streets in Ojo.

“Thereafter, I would take them to some women who would give me stipends. I don’t know what they do with the pants,” he said.

The suspects are all residents of Ilufe area of Ojo.