Horror! Church Building Goes Up In Flames During Sunday Service In Delta


A church building went up in flames during a Sunday service in a community in Delta state. 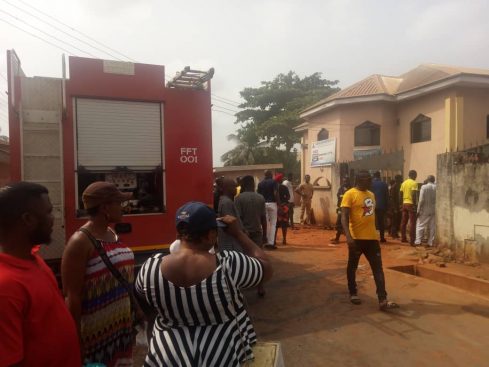 The CRM building that caught fire during church service on Sunday.

According to Daily Trust, the building which houses a new generation Church in Asaba, Delta state, Charismatic Renewal Ministries Inc. (CRM), aka Transformation Faith Centre, yesterday went up in flames during church service, destroying a section of the church complex.

The church, located at No. 35, Biosa Amantu Street, off Jesus Saves road, Oshimili South local government area of the state.

Daliy Trust reports on Monday that the strange fire broke out in one of the rooms in the Church complex where a phone was plugged and kept on top of a mattress.

According to witness, the situation would have been grave but for the swift intervention of the state’s fire service.

It was learnt that the inferno engulfed the administrative section of the church destroying some documents as the surging heat created commotion in the church hall, causing bewildered worshippers to scamper for safety during the incident.

Reacting to the spate of fire incidents in Asaba, the state’s Commissioner of Environment, Chris Onogba, told Daily Trust that his ministry has embarked on aggressive public awareness and media campaign on the dangers of igniting combustible elements in this fire-prone season.