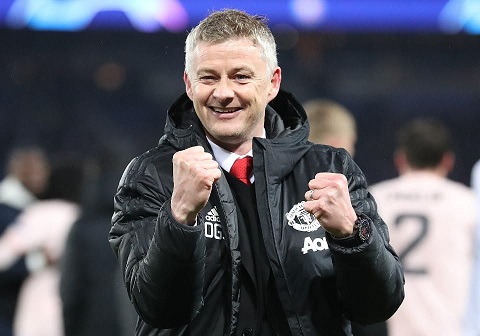 United boss Ole Gunnar Solskjaer
A new club captain has been named by Manchester United.
He is defender, Harry Maguire Maguire who now replaces Ashley Young as skipper after the experienced defender agreed a deal to join Inter Milan in the summer.
United boss Ole Gunnar Solskjaer confirmed to Sky Sports, “Harry has been wearing the captain’s armband.

“And will keep wearing it. He’s come in and been a leader in the group. I’ve been not surprised, but I’ve been impressed by his leadership skills, so Harry will carry on wearing the armband.
“He’s come in and everything about him tells me he’s a leader.
“He’s part of a group that we’ve had that have been leading this young group; Ashley has been, of course, Marcus is a young lad, but David and Harry, Harry, so Harry will keep on wearing the armband now.”
Maguire left Leicester for Old Trafford in the summer, departing on a club-record fee for a defender of around £80m.
The 26-year-old spent two years at City, and he joined United on a six-year deal with an option for a further year.
Maguire’s first game as the Red Devils’ club captain will be against Premier League leaders and fierce rivals Liverpool this weekend.
Top Stories

ASUP Gives Update On Its Ongoing Nationwide Strike, Reveals When It Will End
Recent Stories