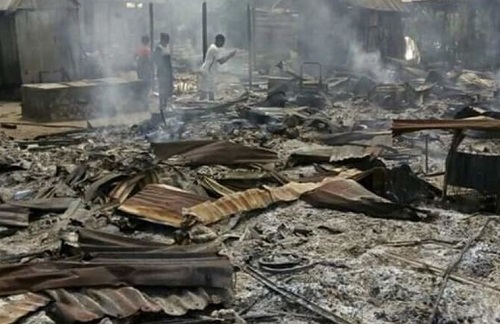 It was gathered that soldiers attacked the community on Friday morning and forced residents to flee into the creeks for safety.

Though no reason had been given for the onslaught that left debris of burnt thatched houses and torched buildings behind, it was learnt that the incident was in connection with the recent killings of four Naval ratings and abduction of foreigners in the area.

The incident occurred when the gunmen seized a dredger escorted by the operatives of the Nigerian Navy Ship (NNS).

The gunmen attacked the Sterling Global Dredger, causing heavy gun battle between them and the ratings.

The gun battle, which reportedly lasted for hours, led to the killings of the four ratings with others sustaining injuries.

The gunmen seized the dredger and abducted two Russian nationals and one Indian.

A resident from the area, who spoke in confidence, confirmed the military invasion describing it as sad.

He suspected the incident to be a revenge mission, but said it was unfortunate the military had chosen such ugly path whenever a crime occurred in an Ijaw community.

The President, EFYC, Etolor Prince, described the action of the military as unprofessional.

He said: “The ongoing military invasion at Bilabiri community is one too many occurrence in Ekeremor LGA and It is so sad that I have to once again condemn this continuous unprofessional act of the Nigerian military at the slightest provocation.

“It is so sad and annoying to note that, one will never see them carrying out this practice in the north where our brothers in the military are killed on duty every now and then but our case here is nothing to write home about. They (military) should know that this approach is nothing working and will never work.

“Please, it is high time the legal luminaries in our region stood up to this injustice meted on our people. I strongly believe, legal actions can go a long way to tackle this menace.

“At this juncture, please permit me to sympathiSe with the people of Bilabiri I & II communities for the loss and I urge government at all levels most especially well- meaning leaders to immediately come to the aid of our people in any way possible to cushion the immediate hardship caused by this attack”.

When contacted the Spokesman, ODS, Eromosele Unuakhalu, promised to get back for clarifications.