A Nigerian internet fraudster has been sentenced to prison in Vietnam for defrauding unsuspecting women. 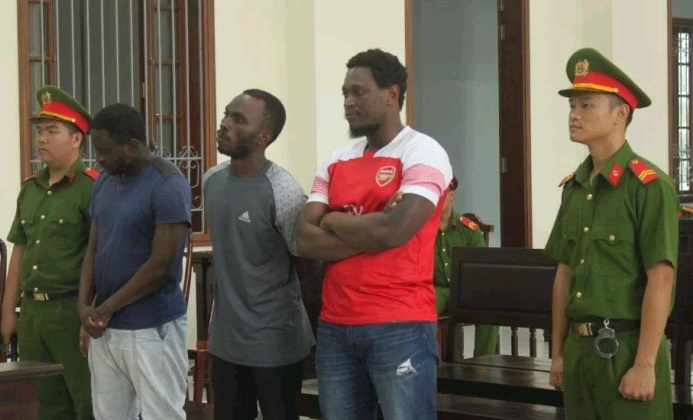 The internet fraudsters after they were arrested
A Nigerian man and two Cameroonians will spend 15-18 years in jail for cheating two Vietnamese women to the tune of more than VND1.5 billion ($65,800).
The internet fraudsters used Facebook to defraud the unsuspecting victims.
Nigerian Ifeanyi Matthew Anthony, 29, and Cameroonians Nguyen Hang Tcheuko Minh, 36, and Mothe De Fouda Paul Martial, 30, were sentenced to jail by the Can Tho People's Court in southern Vietnam on Thursday, January 16, for "obtaining property by fraud"
The three men joined a group of African fraudsters, apparently led by a man called Papa, who contacted women on Facebook and cheated them through various schemes.
One scheme was to ask Vietnamese women to receive and hold large sums of money to be given to members of the group when they arrive to live in Vietnam.
The women would be given 10 percent of the money for their trouble. However, they would have to pay "customs fees" first in order to receive the money.
Another scheme was to advertise a $100,000 solution that could be used to make money with blank paper.
The three defendants tricked a woman from Can Tho and another from the central province of Phu Yen between December 2017 and April 2018. They conned more than VND1 billion from the Can Tho resident and VND528 million from the one in Phu Yen.
Minh and Martial were arrested by Can Tho police on April 6, 2018. Anthony was arrested shortly after.
Minh was a footballer who acquired Vietnamese citizenship in 2013 and played for V League in 2015.
While Minh admitted to his crime, Anthony and Martial said they were only following Papa's instructions.
Finding all three defendants guilty, the court sentenced Minh to 16 years in prison, Anthony 18 years  and Martial 15 years respectively.
Top Stories