It is the end of the road for some deadly kidnappers and killers who killed a businessman over an incident. 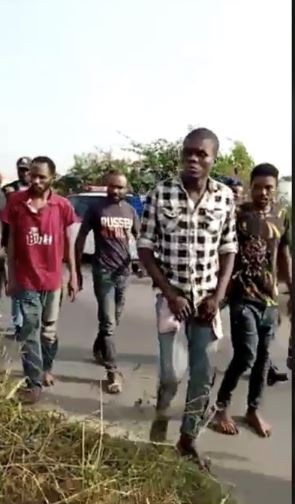 The kidnappers after they were apprehended
Police officers from Zone 2 Police Command have found the corpse suspected to be that of the late Anambra businessman, Ignatus Odunukwe who was allegedly kidnapped and killed by suspected kidnappers sometime in December 2019.
According to Sunday Sun, his abductors pretending to be interested in one of his properties in Ajah area of Lagos lured him to a point where they picked him.
In a five minutes video made available to Sunday Sun, unidentified policemen who introduced themselves as acting on the directives of the Assistant Inspector-General of Police, Zone 2, Ahmed Iliyasu took some suspects allegedly arrested in connection with the case to identify an already decomposed body inside a bag.
The suspects who identified themselves as Arinze, Solomon, Cletus and Daniel Ibeaju took turns to confirm that the body in the bag belongs to the missing businessman whom they killed and dumped his body inside the forest in a remote area close to Ajah.
One of the suspects, identified as Daniel was heard explaining that the dead body was chopped in pieces and squeezed into a big bag and thrown into a carton before they dumped it in the bush.
In the video, one of the policemen who took the time to explain what was going on was heard saying: “This is the gruesome murder of Chief Ignatus Odunukwe, this act was planned and hatched by a gang led by Daniel Ibeaju from Enugu State. It is very unfortunate, the AIG Illayisu has directed us to recover this corpse and take it down to the hospital. The investigation will continue and the outcome will be made known to the public.”
He later called on the medical personnel who were at the scene with their ambulance to evacuate the body to the mortuary.
Confirming the incident, the Zone 2 PRO, Hauwa Idris Adamu, a Deputy Superintendent of Police said that investigation was still ongoing to ascertain what happened.
Watch video below:
Top Stories