Peoples Democratic Party members have abruptly ended their protest in Abuja at the Eagle Square. 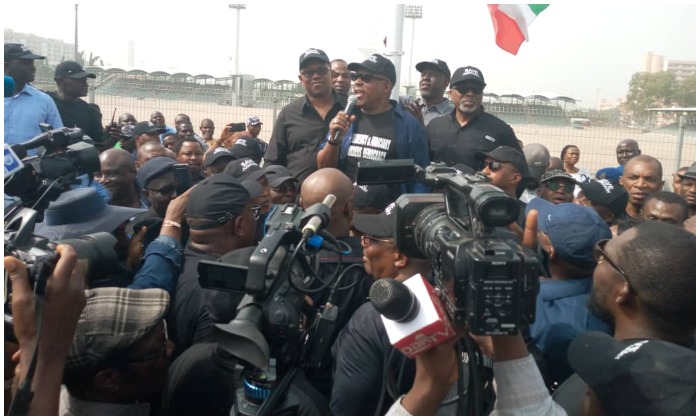 PDP members protesting in Abuja
Members of the Peoples Democratic Party protesting the Supreme Court judgement on Imo state governorship election have been forced to end the protest in Abuja.
The Supreme Court had on January 14 nullified the victory of Chief Emeka Ihedioha, who is the PDP Imo State 2019 governorship candidate.
The apex court had held that the candidate of the All Progressives Congress, Chief Hope Uzodinma, is the duly elected governor of the state and ordered that he should be sworn in as the governor of the state.
According to a report by Punch, some of the PDP leaders at the protest included the PDP National Chairman, Uche Secondus; the 2019 Vice-President candidate, Peter Obi; and the Senate Minority Leader, Enyinnaya Abaribe.
Also present were members of the PDP National Working Committee as well as the PDP Youth Leader, Ude Okoye.
However, the protest ended abruptly after the protesters, who had taken off from the PDP complex in Maitama, Abuja popularly called the Legacy House, en route to the Supreme Court, on getting to the Eagles Square, noticed that suspected members of the All Progressives Congress had gathered at the Supreme Court junction.
The leaders of the protest, to avoid clash or confrontation with the suspected APC members, decided to stop the PDP members from continuing with the protest to the Supreme Court, which initially was supposed to be the terminal point of the protest.
The protest did not also end without an accident. Some of the PDP protesters escaped death by the whiskers.
The affected PDP protesters were in some vehicles, but suddenly at the Transcorp Hilton junction, one of the vehicles rammed unto a truck also conveying some other PDP protesters.
However, there were no injuries and no death recorded.
Top Stories