Luck has ran out on a notorious female armed robber after she was arrested by security operatives. 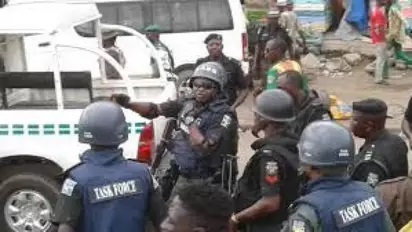 Men of the Delta state police command led by CSP Anieteh Eyoh, on Monday morning, arrested a notorious female armed robber, Bella Lucky, and two other suspects of a criminal gang at McClivers market area in Warri, Delta State.
According to Punch, the armed robbery syndicate, who has been on the police wanted list, included two boys and a female. They are presently in custody at the Delta State Police Command in Asaba.
Daggers and some mobile phones were recovered from the suspects by the police operatives, who tracked the notorious female suspect down to a hideout after she allegedly stabbed and inflicted injuries on a yet-to-be-identified woman.
The notorious female armed robber specialises in luring victims to the criminal gangs terrorising Warri and its environs with a commercial tricycle, popularly known across the state as “Keke”.
Confirming the arrest of the armed robbery syndicate, the Delta State Commissioner of Police, CP Mohammed Hafiz Inuwa, told journalists in Warri that “three of them were arrested. One of them is a very young girl.”
Inuwa said, “These are armed robbers who were using a woman. It’s not a question of a notorious armed robber. It’s a gang using knife, stabbing people and robbing them.”
According to the police boss, the modus operandi of the syndicate is to use the female robber “to deceive passengers, engage them in a discussion, get them carried away, and rob them”.
“They’ve been arrested and they’re in our custody,”, the CP added.
Top Stories