A young lady who has been battling Lyme disease has had to sell her nude photos to fund the treatment. 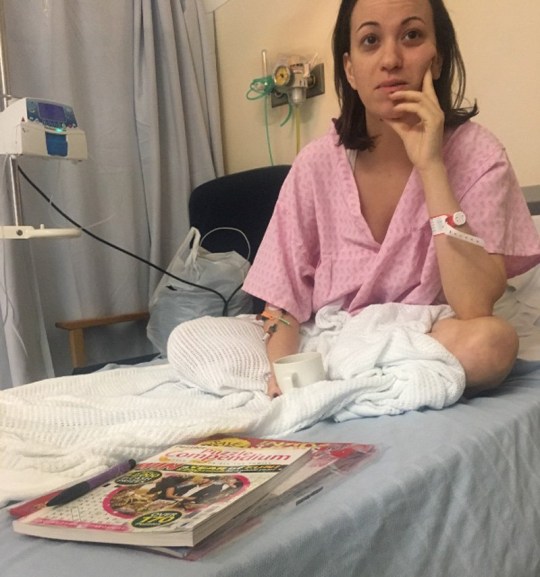 Michelle De Feo, 28, grew up in the countryside, surrounded by horses, dear and woodland.

When she started to get ill three years ago, she had no idea her outdoorsy lifestyle could have been the cause.

Two years ago, she was diagnosed with Lyme disease, a condition caused when an infected tick bites someone.

She started experiencing symptoms a year before when she struggled from dizziness and fatigue and she was also peeing large amounts of blood.

But after lots of tests, she was told she had the condition – but sadly there is not much treatment available on the NHS.

Instead, she found a specialist doctor in Washington, U.S, who she thinks can help but she needs to raise £7,000 to get there and have it.

To raise the money, Michelle has decided to sell nude photos on OnlyFans to suit different types of fetishes, including a selection of feet photos.

She says: ‘I know a lot of people doing it now – there are mums who are struggling to feed their kids doing it.

‘I have written on there that I’m raising money for private funds. Most people are really nice, but then they would be because they are paying.’

Michelle believes she got the condition when she was bitten by a tic at some point before her symptoms started in September 2016.

‘I didn’t know anything about it,’ she said.

‘I was always looking after horses out in shorts and always in the barn. We used to get deers come up to the door too, we never touched them though.

‘I just didn’t feel right at all. I was getting lethargic and feeling so tired and then I got a rash on my arm. I didn’t think anything of it until I got really bad. I felt like I had the flu and got really dozy.

‘Then I was peeing out blood and that’s when I went to the walk-in centre for help.’

She spent a year trying to find out what was wrong before they realised she had Lyme disease.

Lyme disease is known to be incredibly difficult to diagnose and can often show similar symptoms to other conditions.

For Michelle it took a whole year to find out that she actually had it in the first place.

She said: ‘I knew something was wrong. I was getting so tired and so dozy to the point that I couldn’t stand up. I would just be crying in the bathroom saying something isn’t right.

‘We went private and they did lots of tests and blood tests and, in the end, they tested for Lyme disease.

‘We went to the GP with forms and basically they said we can’t treat it. The NHS says there’s nothing we can do except give you pain killers.’

For a year after the diagnosis, Michelle was given medication, a strict diet and a large amount of vitamins to help.

‘It was really scary when I knew I had a diagnosis, my mental health was affected,” she explained.

‘It’s like you are grieving for your old life.’

After a year of treatment, Michelle came off her medication but she then relapsed, feeling exhausted, dizzy and peeing blood once again.

Michelle realised that she needed more treatment and after researching, she found a specialist in Washington.

She visited and decided she wanted to go there to have more treatment.

But as she is unable to work full-time because of her condition, she needed a flexible way to earn money.

She decided to start taking nudes to raise the funds, advertising what she is doing in a bid to hit her target sooner.

Michelle will take several nudes in one day when she is feeling well, and then upload them gradually.

‘I can’t take them every day due to my health. It takes up to three hours to get a good set, so not too long. I have had friends help take them for me.

‘I post all sorts of photos. I used to do a bit of modelling of lingerie topless. It’s all quite tasteful stuff.

‘I even post foot pictures and fetish stuff. I actually prefer doing fetish stuff because you can keep your clothes on.’

Now she is slowly gathering the funds and admits it has been difficult explaining what she is doing to her family.

‘My dad found out and he was a little bit upset. He said he felt sad that I was doing it,’ she said.

‘My mum is alright with it. She said it’s kind of empowering if you are a woman in your situation.

‘I’m going to get judged and my dad gets upset and other family members do. But if you were in my situation you would do anything.’

Deep down, Michelle does worry about what she is doing sometimes.

‘I believe I shouldn’t be doing this, if I’m being honest,’ she explained.

‘But I think it goes to show how desperate we are to get our lives in order and get the right treatment.

‘I need to spread awareness as I can and I believe others with Lyme should tell their stories too.

‘I have a GoFundMe page because I can’t work 9-5, for obvious reasons, and I’m trying to get money because I’m still on supplements.’

Michelle knows that there is no cure, but she hopes that the best treatment will get her into remission, so she can start living her life again.

A spokesperson for NHS England and NHS Improvement in the East of England, said: ‘Lyme disease can sometimes be difficult to diagnose as symptoms, such as feeling hot and shivery, headaches, aching muscles or feeling sick, can also occur in other conditions.

‘If you have been bitten by a tick and feel unwell with flu-like symptoms or develop a circular red rash, you should visit your GP or call NHS 111.’