Kwara State Workers have organised a peaceful protest demanding for their three months salary to be paid. 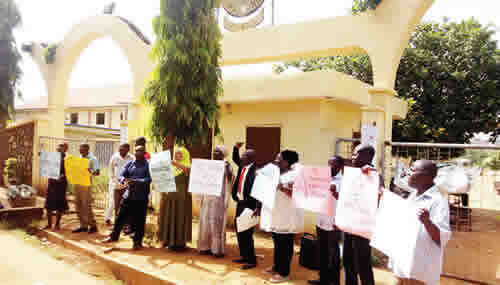 Workers of the Kwara Waste Management Company, on Monday, staged a peaceful protest in Ilorin to demand payment of their three months’ outstanding salaries from the state government.

The workers, who walked through Emir’s Road to the state Ministry of Environment, carried placards with various inscriptions.

Some of the placards read, “Pay us our three months salaries”, “We get a meagre N7,500 as salary”, and “We have families to cater for” among others.

One of the workers, Mrs Ajara Kawu, told the News Agency of Nigeria that they were owed three months salaries despite earning a meagre of N7,500 monthly.

Kawu noted that they had to embark on the protest when dialogue with appropriate government authorities failed to yield the desired result.

She urged the state government to pity their conditions and ensure prompt payment of their salaries, which, she said, was not enough in the first instance.

Another worker, Madam Salmat Ibrahim, regretted that they had worked for more than 15 years without any review of salary.

Ibrahim said half of the salary was usually spent on transportation and other logistics making the income inadequate.

Reacting to the protest, Ms Folashade Yusuf, the Press Secretary in the state Ministry for Environment, said arrangement was on to pay the salaries soon.

Yusuf asserted that they were only owed two months as salary for the month of January was not ready because the month was not yet over.