He dismissed the fear that governors may use the outfit to fight perceived political opponents. 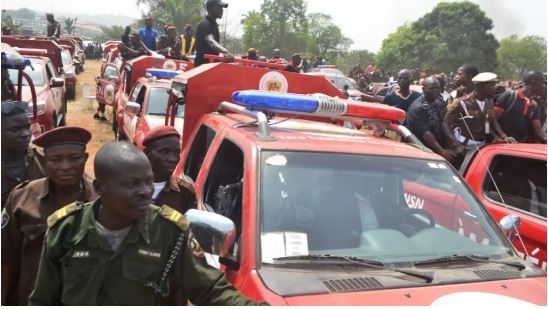 Some Yoruba groups are protesting the declaration of Amotekun as illegal by the Buhari government.

Taking part in the rally are members of the Yoruba socio-cultural group, the Odua Peoples’ Congress (OPC), Yoruba World Congress (YWC), among others.

Amotekun is a security outfit initiative of the South-West Governors, recently created to support security agencies in checking crime in the Southwest. The protesters thronged the Gani Fawhinmi park at Ojota in what they tagged “Amotekun Solidarity Walk”.

The protest is slated to take place in all the six South-West states comprising Lagos, Ogun, Oyo, Osun, Ondo and Ekiti. Ekiti State Governor, Kayode Fayemi, recently said that Amotekun was not in conflict with the role of the police.

He dismissed the fear that governors may use the outfit to fight perceived political opponents.

Fayemi said: “Governors, whether we like it or not, have a duty and responsibility, which are clearly spelt out in the constitution. The security and welfare of citizens are the number one job of any governor. You may define that in whichever way you want, but that is the number one job we have.

“The people within my jurisdiction are saying ‘we don’t know what you are doing, you are funding the police, you are buying vehicles, you are buying security gadgets, you are even paying allowances, yet we don’t get enough security.’ There is nothing unique in what we have done.

“I am glad with my colleagues in the North-Central. I was reading in the paper where Governor Simon Lalong was saying, “We haven’t seen the details of what they did in the South-West, but I think this is something we are working on, a similar arrangement in our own area. Amotekun is nothing but a confidence building measure to include our people in community policing arrangement.

“This is because those who are responsible for this problem live among them. Members of Boko Haram are not from outer space, they are from Nigeria. And they live among people. Why are we denying? What we are doing is not an exception at all. So, the notion that if you allow governors to do this they would abuse it by using it to intimidate opponents is not tenable.

“One of the reasons this Amotekun is regional is that we don’t want anyone to reduce it to a machinery of oppression against their people. But some governors were not there. Was that an indication that they were not fully behind it? Every governor was involved. We started the process in June last year after we had a spate of kidnappings and banditry in the South-West.”