Photo Of Businessman Who Was Killed By Gunmen In Imo


A businessman has been killed by some gunmen just before midnight in a community in Imo state. 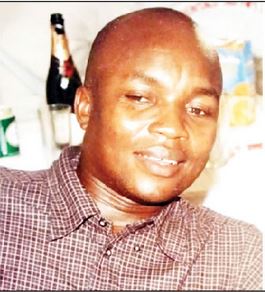 According to a report by Punch Metro, there was panic in Imo State on Tuesday following the killing of a businessman, Ugochukwu Oguine, by yet-to-be identified gunmen.

The businessman, it was learnt, was killed before midnight on Monday at Anara in the Isaiala Mbano Local Government Area of the state.

The incident, which happened around the Assemblies of God Church on the Okigwe/Owerri Expressway, caused panic in the community.

It was learnt that the victim, who was shot at the spot, drove to the Bonimas filling station in Anara, his hometown, where he died.

He was immediately rushed to hospital, where he was confirmed dead.

“Oguine was shot before midnight at a spot before the Assemblies of God Church on the Okigwe/Owerri Expressway, but he drove to the Bonimas filling station close to his house, where he died. He was confirmed dead by doctors at a hospital he was rushed to,” a source said.

When contacted, the police spokesperson in the state, Orlando Ikeokwu, said that the Commissioner of Police had ordered an investigation into the killing.

Ikeokwu said that the CP had dispatched operatives of the Special Anti-Robbery Squad and the Anti- Kidnapping Unit of the command in the scene of the murder.

He added that it was expected that the operatives would apprehend the fleeing gunmen.

“We are aware of the killing, but the CP has dispatched operatives of the Special Anti-Robbery Squad and the Anti-Kidnapping Unit of the command to the crime scene. We will not rest until we apprehend the fleeing murderers,” he stated.