The story has been told of Pa Idris Ola Lediju who is said to be the oldest author in Nigeria. 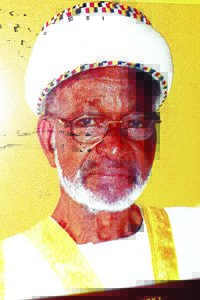 He is a devoted Muslim and telecommunication engineer. At 97, Pa Idris Ola Lediju may be retired, but he is certainly not tired. Arguably, he has become Nigeria’s oldest author by penning his autobiography at the age of 97, reports OZOLUA UHAKHEME, Assistant Editor (Arts).


It was a celebration of the power of the written words. It was also a historic moment of honour for 97-year-old Pa Idris Ola Lediju, a retired telecommunication engineer, who, perhaps, is Nigeria’s oldest author.

They gathered there to pay tribute to Lediju as he presented his autobiography entitled: Selfless Service: Reminiscences of a modest civil servant and cleric.

At 97, Pa Lediju set an enviable record of being Nigeria’s latest and oldest author. This feat and his selfless service to Nigeria as a telecommunication engineer attracted eulogies from guests who described him as a rare breed and a great servant of God.

Pa Lediju had his secondary education at MBHS between 1939 and 1943 before joining the Nigerian Railway Corporation as a clerk. He later moved to Post and Telecommunicatios (P&T), and trained at the P&T training school Oshodi, where he later became an instructor.

He also had his professional training in the UK as an engineer between 1953 and 1958. Pa Lediju was appointed as a non executive director of Austro-Consult.

The early sets of MBHS seem to share one common but strong passion: preserving legacy through the publication of books.

In July 2018, at the age of 86, Olola Ogunlana, one of MBHS old boys launched two books- Out of the black pot and The selected tales- same day at the Civic Centre, Victoria Island Lagos.  The focus of the books by the octogenarian was the preservation of Yoruba culture, particularly moral discipline, ethics and language.

The elated nonagenarian, who walked unaided and spoke fluently while sharing  rib-cracking jokes, thanked the guests for the honour, saying he was overwhelmed by the turnout and the rain of tributes. .  “I am overwhelmed by this turnout. I thank all of you for this great honour,” he said.

He recounted the old days, growing up in Lagos, saying: “Life in Lagos in my time was both exciting and memorable. The normal day started with the sound of a canon at about 5.30 am from Apapa Naval Dock simultaneously with a call to Faji prayers from all nearby mosques.

This was followed by a surge of pedestrian and vehicular traffic from Carter Bridge along Victoria Road (now Nnamdi Azikiwe Street and Broad Street converging at Tinubu Square and continuing  towards the southern end of Broad Street where major elementary and secondary schools were situated.

“Another canon shot was fired from Apapa at 8 pm almost simultaneously with the Islamic call to the Isha prayers after which the children and respectful ladies and gentlemen retired to their homes.

At 9 pm, the Night Soil Train commenced its journey from Agarawu Square enroute Faji market, Tokunbo Street to the junction of Bamgbose, and Lewis Streets, through Igbosere Road and crossing behind the Kings College to Okokomaiko.

The sounding of the siren of this train also signalled the end of all on-licences trading in spirits and alcoholic beverages.”

He said he owed the writing of the autobiography to the insistence of his childhood friend, the late Prof. Aliu Babatunde Fafunwa, who pushed him to go beyond the scope of his various papers and lectures on telecommunication.

“This was in spite of his awareness of my negative attitudes towards writing an autobiography. However, during one of our formal family meetings, a great grand-nephew requested more information about certain unrecorded aspects of our family history. 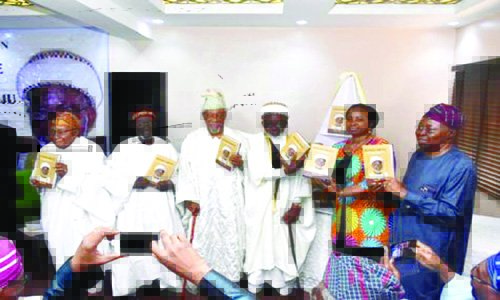 Another grand-niece too wanted to know about my scouting activities, the scope of which took me round the world and also about the role I played in the Second World War having not being a soldier.

All such enquiries from the fourth generation of my family provoked me as head of Lediju family to want to produce at least some reminiscences of events of my life for posterity,” he recalled.

Chairman of the occasion Alhaji Okunnu described Pa Lediju, who is the Imam of Ikoyi and Victoria Island, Lagos Jammat, as a reference point in the history of telecommunication and Scout Movement in Nigeria.

Acknowledging Lediju as a great servant of God, Okunnu noted that in religious matters, Lagos people do not discriminate between Christians and Muslims.

“We don’t have antagonism in Lagos. It is foreign to us. Every family does not discriminate between Christians or Muslims. I wish Nigeria was like Lagos, what a great country Nigeria would have been,” he added.

He said Pa Lediju is also competent in the history of Lagos, noting that the author is a bit partial because he confined himself to the two, mile radius of 20 Victoria Street, Lagos.

“We hope to hear from him even at 97 on the history of Isale Eko, Oke Popo and Brazilian quarters because he has wealth of knowledge on this. One observation I find in the book is his failure to admit his indebtedness to King’s College, Lagos because one of his teachers Mr. A B Oyediran left King’s College in 1954 and later became the first Nigerian Principal of Methodist Boys High School. I hope he will write a post script to acknowledge this debt to King’s College, Lagos,” he said, reawakening the seeming healthy rivalry between the two great schools.

Wife of Chairman, Bi-Courtney Group of Companies, Chief Wale Babalakin, Mrs Gbolahan Babalakin, recalled that when she recited the Koran while growing up as a child, it was the voice of Pa Lejidu that she always heard.

According to her, his intonation was so clear and you would want to emulate him. “Many of us here today are beneficiaries of Pa Lejidu,” she said with all gratitude.

Former deputy Governor of Lagos State, Alhaja Ojikutu who commended the author for documenting the many memorable events of his life, lamented that the Lagos of today was not the Lagos they grew up in, noting that Isale Eko (Lagos Island) was never a slum while she was growing up.

“It was a decent community with decent people and culture. We have lots of unique things and we grew up in a Lagos that was beautiful.

I am happy we have someone who has been able to commit these into black and white. The Lagos we are living today is not our Lagos.

If Lagos was bad, will anybody come here? Many people decided to come to Lagos because anything good started from Lagos be it fashion, music etc. Lagos is a melting pot despite the popular saying of Eko gbole o gbole,” she said.

Reviewer of the book, Dr. Nadu Denloye, said the 400-page book is packed full of interesting anecdotes, facts, history, lessons that it would take the whole day to do the slightest bit of justice to this life story of indeed selfless service.

She described the book as a veritable goldmine for students of the history of Nigeria and in particular that of telecommunications and the Boys’ Scouts movement in Nigeria.

According to her, the style of the book is Papa’s mannerism which is candid and forthright. His sense of humour, she said, is also palpable and is interpersed with interesting facts and useful information on practices of his time.

“In this book, we can see evidence of his very large network. Besides mention of various people from many walks of life who crossed his path, he provides insights into their lives – some his childhood friends, relations, schoolmates, teachers, colleagues, bosses and mentors.

Learnt a bit more about my father and my uncle in law, Chief S.M.O Denloye, the latter’s sojourn in Zaria for example. So if you have a family member associated with Pa Lediju in one way or the other, this book may open up some new revelations for you about them.

”The level of detail- the names, dates, events, chronological order, pictures, supporting documents etc point to journaling and the underlying discipline that comes with it, not to talk of the research and other efforts that have gone into the production of the book,” she added.