Nigeria's vice president, Yemi Osinbajo has met behind closed doors with South-West governors in order to settle the raging war over operation Amotekun. 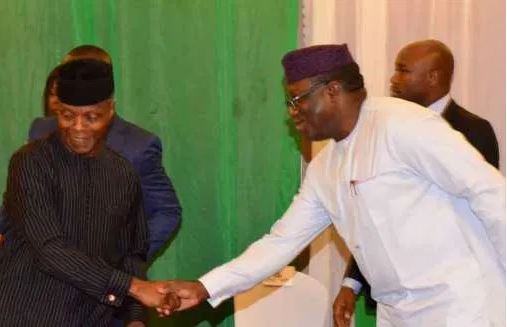 Osinbajo and Goverrno Fayemi of Ekiti state
Vice President Yemi Osinbajo is currently meeting behind closed doors with the Governors of South West Governors at the Presidential Villa, Abuja, according to a report by Vanguard.
Also in attendance are: the Inspector General of Police, IGP, Mohammed Adamu and the Attorney General of the Federation, AGF, and Minister of Justice, Abubakar Malami.
The meeting started immediately after the expanded National Economic Council, NEC, meeting, presided over by the Vice President at the Conference Hall, Presidential Villa.
Osinbajo’s meeting with the South West Governors was reliably gathered was on the recently launched regional security outfit, Amotekun which the Federal Government has described as illegal.
Recall that President Muhammadu Buhari had recently emphasized the importance of Community Policing which he said was part of the policy of his administration to curb security challenges in the country.
Although the Attorney General of the Federation, AGF, and Minister of Justice, Abubakar Malami had described Amotekun as illegal, the South West Governors and leaders of South West said there was no going back in the implementation of the new security outfit.
Top Stories