A soldier has left his best friend very emotional after he turned up for the man's wedding ceremony. 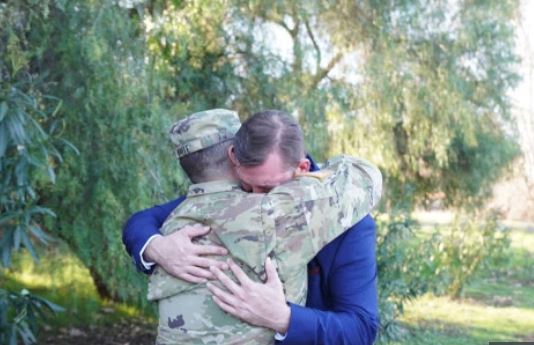 Steven Marec was surprised on his wedding day by his best man, who he thought was deployed overseas

An emotional groom was brought to tears when a best man who he thought was on deployment overseas turned up to surprise him on his wedding day.

Steven Marec was surprised on his wedding day by his best man, who he thought was deployed overseas

The tear-jerking momentt saw Steven and his new wife, Lauren, walking along for wedding photos, when someone suddenly shouted: “Congratulations, Mr. and Mrs. Marec!”

Steven, 27, suddenly froze and his jaw dropped as, out of the bushes, AJ appeared with a huge smile on his face.

The groom was unable to control himself, immediately starting to bawl hysterically while AJ, 27, approached.

The best friends then embraced as Steven cried uncontrollably on his best man’s shoulder.

AJ and Steven met nine years ago, and despite AJ’s work with the US Army, the pair have remained close friends ever since.

Steven’s wedding day was set for a date that AJ could attend – but ahead of the big day, in Fallbrook, California, on January 5, AJ got the news that he would be deployed overseas for between 10 and 12 months. 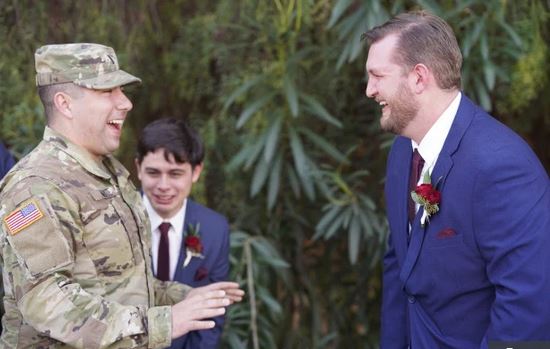 Due to a change in his schedule, AJ was still in the US and decided to surprise Steven on his big day in Orange County, California

A heartbroken Steven accepted the situation.

But a few days before the wedding, AJ found out that his deployment had been pushed back by a couple of days and he would not be working on the base where he was stationed.

Having checked with his superiors, AJ – whose deployment details and location are classified – then planned the surprise with Steven’s friends and family.

Steven, from Aliso Viejo, California, said: “Our bond together can only be explained as the brother I never expected to have.

“I cry every time I see it, it’s still so unreal that it happened.

“For every family, friend, or loved ones that are going or coming back from their deployment. Never underestimate them, they will always be there for you when you need it.

“With all the chaos going on right now it's such a gift to have these moments that you never expect to happen."